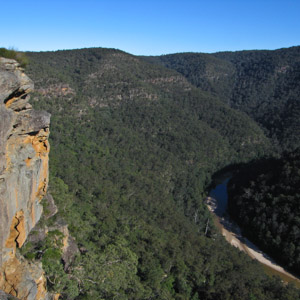 Looking down from the cliffs above the Colo River, Wollemi National Park

At over 487,000 hectares, Wollemi National Park is the second largest park in the state behind Kosciuszko. Lying around 150km north west of Sydney, it forms part of an amazing belt of green that surrounds the city. It contains the largest remaining area of wilderness in NSW. It is also part of the Greater Blue Mountains World Heritage Area. As an area for adventuring it is almost without peer. Few people venture more than a handful of kilometres from the boundaries of the park, and as a result there is an intense feeling of remoteness once you head into the interior. Weeks can be spent bushwalking, canyoning, liloing and climbing in various areas of Wollemi.

There are numerous access points around the perimeter of the park, although some of them are through private property and permission must be obtained in advance. Going clockwise around the park, on the south west side access is possible via the fire roads in Newnes State Forest, at Newnes itself, and through private property at Glen Davis. Further north, Dunn's Swamp camping area provides access near Rylstone. Access on the northern edge is through private property in the Widden Valley, and also Blackwattle Creek, and permission should be sought. From the eastern side a number of fire trails provide access - the Hunter Range trail near Putty, Culoul Range Fire Trail, Grassy Hill Fire Trail, Drip Rock Fire Trail, and Bob Turners Track. On the south east side, access is possible along the river from Upper Colo and also from Mountain Lagoon. Most of these access points can be found easily on maps, but most of the fire trails have locked gates before their ends.

Wollemi covers a huge area, and both short day walks and extended walks of a week or more are possible in the park. Due to limited access, the most popular areas are around Newnes on the west side of the park, Mountain Lagoon on the southern edge, and the fire trails that give access to the Colo River on the south east side.

Wollemi is a canyoner's paradise, with numerous areas abounding in canyons. However, much of Wollemi is wilderness and access points to the perimeter are few. As a result only a few areas are canyoned extensively, although the potential for exploratory canyoning for experienced parties is huge. The main areas for canyoning inside the park are downstream from Newnes and Glen Davis, and on the surrounding tops. Many other easily accessible canyons lie in the Newnes State Forest area.

Dunns Swamp, in the north west of the park, provides opportunities for canoeing. The only creek in the park that is navigable by kayak is the Colo River. However, this requires a significant amount of rain, and is an extremely difficult undertaking (Grade 6). Flat water paddling can be undertaken in the lower reaches of the Colo, near Upper Colo.

Much of Wollemi is wilderness, and as such is currently out of bounds for mountain biking. Some possibilities for rides include around the Glowworm Tunnel and other roads on the Newnes Plateau (not all inside the park), in the Mountain Lagoon area, and along the fire trails off the Putty Rd, such as the Culoul Range Trail and the Grassy Hill Trail.

A challenging river walk along the lower reaches of the Colo River.

A challenging walk through some of the best scenery in the upper Colo River.

A relatively easy route to the magnificent Colo River, with good swimming and the option of camping.

One of the easiest routes to the Colo River. A lovely pool and beach make it a delightful spot for swimming, although it is a decent climb in and out.

A short walk to a spectacular lookout over Wollemi Creek and the upper Colo River.

A useful little book with a number of less well known walks in the one of the state's biggest wilderness areas.

A summary of information about Wollemi National Park, including information on camping facilities, visitor centres, animal species list and plan of management