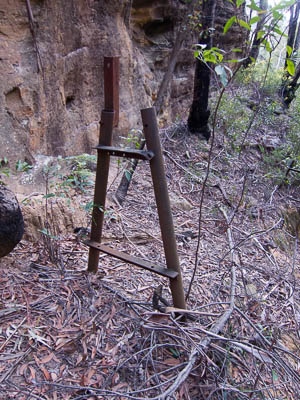 Remains of the supports for the old pipeline

The Pipeline Track connects the ghost town of Newnes in the Wolgan Valley, with the small town of Glen Davis in the Capertee Valley. The historic track follows the route of the old pipeline which was built from Glen Davis to Newnes Junction, after the oil shale works at Newnes closed down.

The directions below are given as if starting at Newnes, but sufficient detail is given for both directions that you could start at either.

The track notes assume you are starting at the main campsite at Newnes, on the north side of Little Capertee Creek. For information on how to get to Newnes, see "Related Regions - Newnes and the Wolgan Valley".

Update: 08 June 2014. Pipeline Track closed
The Pipeline Track is closed near Glen Davis, due to issues with private land. It is still possible to walk from the Newnes side to the lookout at the top of the pass and back down. See the NPWS Park Alerts page for more information and updates.

From the main (Little Capertee) campground at Newnes, follow a track out of the north eastern corner. Cross the steep gully, either on the log, or more safely by dropping down and climbing up the other side. Continue following a track along the left bank of the river for 2km to the bottom of the Pipeline Track to Glen Davis (signposted). There are some tracks leading to the left, away from the river, and these should be ignored. There are nettles in a few places, so some leg protection could be in order. Crossing Petries Gully often involves care, or wet feet. The bottom of the Pipeline Track is reached just after the Petries Gully crossing. 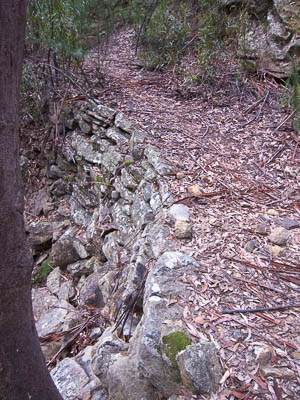 Stone walling on the track

Climb up to the top of the hill on the track. The first section of the track climbs steadily across the steep slopes. Around 120m is gained before the track swings around an exposed point and into a deep gully. The next bit of the climb is much steeper, a switchback trail that climbs another 200m through the two main clifflines of the Wolgan. There is a short scramble at one point up a rock slab.

At the top of the hill, a sign points to a good lookout about 100m walk to the south. This is the Pagoda Lookout, and should not be missed. It makes for some of the best views of the walk, looking out over the spectacular cliffs of the Wolgan Valley. The track to the lookout is pretty vague, but it is simply a case of following the ridge to the cliff.

Return from the lookout, and continue along the main track to the watershed, where there is a National Parks sign about Starlight Canyon.

Drop down the gully on the other side. The track is eroded and can be difficult to follow in places. Sometimes the track is the gully itself, other times on one bank or the other. After crossing two gullies in quick succession, it climbs out on the eastern side, contouring above the creek. The track is relatively flat until it rounds the point, and then drops down more steeply into a creek.

After crossing the creek, the visitors book is reached. The track then passes through a section of private property, before becoming a fire trail and descending a hill. Pass a national parks sign a little way before reaching a street junction between Tooral St and Yarool St. Turn right on to Yarool St, cross over a creek at a concrete ford, and climb the hill crossing an intersection. Down the other side of the hill, cross another intersection, and finally cross a small creek to the community centre and campground. 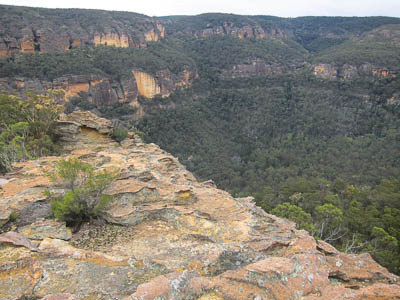 View from the lookout on the Newnes side

From the community centre and toilets at the campground at Glen Davis, head west across a small creek and through an intersection on to Yarool St. Follow Yarool St up and over a hill (crossing another intersection), across a concrete ford, to the junction with Tooral St. Turn left here on to a fire trail - there may be a white sign stating "600m to start of walking track to Wolgan-Newnes). About 100m or so along the fire trail you will see national parks signs for Wollemi NP and for the "Pipeline Pass Track". Continue up the hill on the fire trail, which slowly becomes a foot track. Ignoring a couple of minor tracks off to the left, the track passes through a section of private property, before reaching the visitors book. Just after the visitors book, the track crosses a creek, and then starts climbing steadily up a hill for some way.

After the climb, the track flattens out. If you look down to your right, in many places there is stone walling from the original building of the track. The track swings around into the aptly named Green Gully, the bottom of which is filled with ferns. You will most likely hear the sounds of bellbirds, whipbirds and possibly lyrebirds. The track stays on the eastern side of the creek until it crosses two gullies in quick succession. From there, it starts to climb steadily, criss-crossing the creek a number of times. There are very brief occasions when the track is in the creek itself, but normally it can be found snaking along one bank or the other. If you keep an eye out, you will see sections of the old pipeline itself, as well as metal supports that used to hold it above the gully. A final steep climb brings you to a saddle, and a National Parks sign about Starlight Canyon.

Continue along the track to the top of the next rise, where a sign points to a lookout on the cliffs to the south. This is well worth the detour. The main track continues down into the gully, which gets steadily steeper until it emerges from between the cliffs at the bottom of the main part of the pass. It then swings around to the west and descends more gently to the river. At the bottom, turn right at the sign, and head along to a creek crossing (possible wet feet). Pick up the fire trail on the other side, and follow this for 2km back to the campground at Newnes.