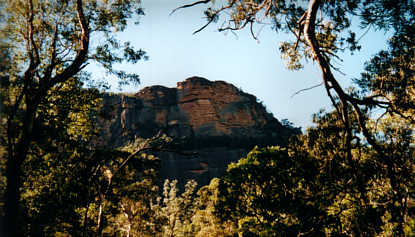 The Wolgan Valley is one of the most impressive gorges in the state, and is rimmed by massive cliffs for nearly 30km downstream to where it meets the Capertee River to form the Colo River. This walk heads about 12km down the river on the old fire trail to the junction with Rocky Creek. There is good camping at a number of places near the junction. The walk can be done at any time of the year.

The track notes assume you are starting at the main campsite at Newnes, on the north side of Little Capertee Creek. For information on how to get to Newnes, see "Related Regions - Newnes and the Wolgan Valley".

From the main campsite, cross Little Capertee Creek, and walk about 500m upstream along the road on the Wolgan to the vehicle ford. Cross the ford, and turn left on the road. The trail reaches a locked gate before the refinery ruins after about 1.5km.

Alternatively it is possible to take a short cut from the main campsite by wading directly across the Wolgan River. A short section of bush brings you out in the Southside campside. Head across the clearing to the road and turn left to get to the refinery ruins as above.

Shortly after the locked gate, take the right fork and follow the track through the ruins. Continue on the fire trail to the east when the ruins track swings north.

After leaving the ruins track, the fire trail heads down a longish hill and crosses a washed out gully. A fenced off mine shaft can be seen on the right. Another 2km of walking brings you to Firefly Creek, which will run for a little while after rain. Just after this the track climbs steeply up a hill and away from the river. This section of the track used to follow the river, but a massive flood in 1978 washed away the road, and a new route was blasted. The river in this section, with its steep rocky banks, is known as the Devils Pinch. 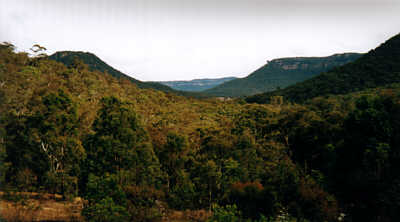 Once down the other side, it is less than 2km of pleasant flat walking to reach the broken gate of the old Luchetti farm. The farm is unfortunately being overtaken by thistles and nettles (although the nettles are probably natives). There are a couple of nice campsites through this section if you decided not to go all the way to Rocky Creek. Shortly after this, Twilight Creek is crossed. This is usually dry unless there has been recent rain.

Just after this the road climbs up and away from the river. It undulates for a while and then after about 2km descends steeply down to the junction of the Wolgan River and Rocky Creek. There are a couple of grassy campsites about 50m back from the junction that would be more pleasant in winter as they get the sun earlier. In summer the best spots to camp are probably right next to the river on sandy flats under shady trees, or across the other side of Rocky Creek on a small grassy flat just off the main fire trail. Water can be obtained from Rocky Creek. Neither the Wolgan River nor Rocky Creek are deep enough to swim in near the camp, but there are some waist deep pools to cool off in if it is hot.

There used to be a track out to the junction of Deanes and Rocky Creeks where there were also campsites, but the track now appears to be largely overgrown. If you wanted to head out there, watch for a green marshy area on your left about 2km past Twilight Creek as you come from Newnes. The fire trail then goes up a hill, turns right then left after about 30m, and the route to Deanes Creek begins on the right about 20m past that, marked by a cairn. The best route stays high on the ridge for the first 500m or so and then drops to be on the edge for the last 500m. This is pretty difficult to find due to the hundreds of competing wombat tracks. The campsite is a small flat area about 10m from Deanes Creek. Alternatively, cross Deanes Creek and camp on the larger flat area on the other side of the junction.

On the second day retrace your route back to Newnes

If you have time, have a look around the ruins of the old oil shale refinery. Then have a look at the picture of the refinery in its heyday at the old hotel. The difference is amazing, and testament to the ability of nature to reclaim its own.