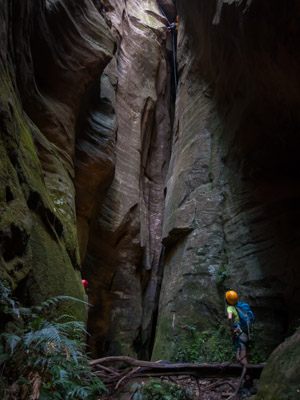 Abseiling in a canyon in the Wolgan Valley, near Newnes, Wollemi National Park

Newnes lies on the western edge of Wollemi National Park, about 200km northwest of Sydney and 50km north of Lithgow. Newnes is on the Wolgan River, at the point where the Wolgan River gorge narrows dramatically as the river heads into the Wollemi Wilderness. In the early part of the 20th century, Newnes was the centre of a shale oil mining industry. That industry closed in the 1930s, and with it, the majority of the town. These days there is a large campground, and the ruins of the oil shale works are a popular walk.

From Sydney, follow the Great Western Highway to Lithgow. Stay on the Highway past Lithgow and take the Mudgee turnoff on the left about 8km past the traffic lights at Lithgow. 4km further on at Wallerawang, take the signposted turnoff to the right to Newnes. About 500m further on, keep going straight ahead (where the road veers left) in the town of Lidsdale. It is about 10km to the top of Wolgan Gap, where the road becomes narrow and winding for about 2km down the steep descent. Then it is another 14km of bitumen road to the Wolgan Valley Resort, and a ford at Barton Creek. From there it is dirt road for the last 8.5km to Newnes, usually fairly good quality. There is a kiosk/information centre in the old hotel on the left, and the main campsite is 1km further on. The only services at Newnes are a small kiosk which has no refrigeration and is only open on the weekends. The nearest food and petrol is in Lidsdale.

Numerous on and off track walks start from Newnes. The most popular are the short walk around the ruins of the old oil shale refinery, and the nearby walk from the Newnes Road to the Glowworm Tunnel. Other popular and well known walks include the Pipeline Track to Glen Davis, down the Wolgan River to Annie Rowan and Rocky Creeks, up Little Capertee Creek to Red Rocks and Mt Dawson, and the climb up Mystery Mountain behind Newnes campground.

There are two major campgrounds at Newnes itself, and a number of minor areas.

The main campground is just across the north side of Little Capertee Creek. It is reached by continuing along the main road north from the old hotel for a little less than a kilometre. The creek crossing is now sealed, so unless the creek is very high there should be no problems crossing in a 2WD car. There are two pit toilets.

The other campground, known as Southside, requires crossing the Wolgan River at the ford on your right about 250m past the old hotel. Turn left at the T-intersection on the other side of the river, and follow the road, and you can see the campground on your left after about 500m. The river bottom is not sealed, and is sometimes sandy and sometimes rocky. 4WD and AWD vehicles are usually able to cross. 2WD cars should check the river before trying to cross, particularly if rain is forecast. If it rains, you will have trouble getting back. There is one pit toilet.

There are also a number of smaller campsites on the left further down this road towards the refinery ruins.

The Wolgan River is generally too shallow and rocky to accommodate kayaking. Where it joins with the Capertee to form the Colo it can be canoed, but it is a very difficult trip and can only usually be done on the back of a minor flood.

Numerous canyons can be found on the tops north and south of the Wolgan River, though very few are done frequently. Navigation can be difficult at times, particularly finding passes through the cliff lines to get up on to the plateaux. Published route descriptions are limited due to the desire by many canyoners to prevent the canyons from being damaged through overuse. The most popular canyons are probably Pipeline, Newnes (Starlight) Canyon and Devils Pinch Canyon.

Plenty of opportunity for exploratory canyoning exists, particularly further downstream, and in the tributaries of Rocky, Deanes and Annie Rowan Creeks.

The Wolgan Valley is a popular climbing destination with numerous crags catering for all types of climbing, including sports routes and multi pitch climbs. A good place to start for information is Wade Stevens "Wolgan Valley - Selected Climbing Areas".

Cycling near Newnes is now relatively restricted due to the declaration of the Wollemi Wilderness Area. Trips such as those down the Wolgan River to Rocky Creek and Annie Rowan Creek are no longer permitted. The main ride that can be done is from the campground to the Glowworm Tunnel, following the old railway line. A loop can be completed by continuing to the Old Coach Road, and following it north to where it meets the railway line again. Bikes must be walked between the Glowworm Tunnel car park and the Pagoda Track turnoff.