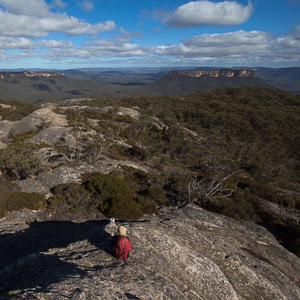 Gardens of Stone National Park is a medium-sized national park of around 15,000 ha, consisting of three separate parts, around 40km north of Lithgow and 130km NW of Sydney. It protects a landscape of cliffs, stunning rock pagodas and slot canyons, hence the name. It is part of the Greater Blue Mountains World Heritage Area, and adjoins Wollemi NP (to the east) and Mugii Murum-ban SCA (to the north).

The northern part of the park covers the spectacular and distinctive Pantoneys Crown, the valleys of Red Rock Creek, Crown Creek and Coco Creek, and the western escarpment of the Wolgan-Capertee Divide; the south-eastern part protects the cliffs and canyons of the Newnes Plateau, while the small middle section covers Donkey Mountain, an island of rock rising out of the Wolgan Valley. Being further north and west than the Blue Mountains, the area receives much less rainfall, and even larger creeks can dry up after dry spells.

Because of the number of different sections, the park has a range of accesses.

The area around Pantoneys Crown can be accessed from the north, off the Glen Davis Rd, or more commonly from either the fire trail that leaves the Wolgan Rd 7.7km after the turnoff from the Castlereagh Highway at Lidsdale, or the Moffitt Trail that leaves the Castlereagh Highway at the railway crossing at Ben Bullen. Both of these fire trails are rough at the best of times, and may not be 2WD accessible, even in good weather.

In the middle section of the park, Donkey Mountain is accessed off the Wolgan Rd, on the way to Newnes, just before the Emirates Resort and Barton Creek ford.

In the south-eastern section of the park, the main access is via the Sunnyside Ridge Road (fire trail) that leaves the Glowworm Tunnel Road at the Bungleboori Camping Area.

The best views of the Gardens of Stone by car can be found at Pearsons Lookout, on the Castlereagh Highway, 3km south of Capertee.

There is plenty of scope for bushwalking in the park. It is largely off track as there are no marked tracks once you leave the fire trails. While there are some existing footpads, these are only maintained by the traffic of bushwalkers walking them, and can appear and disappear from time to time. Possible walks include Pantoneys Crown, with tricky passes at both ends requiring some exposed scrambling and exploring Donkey Mountain, a maze of slots, pillars and mini-canyons. The traverse of the Wolgan-Capertee Divide from Newnes to Baal Bone Gap also includes a section inside Gardens of Stone NP, once you leave Wollemi NP. All of these walks are for experienced parties, as there is often route and pass-finding involved. Water can be an issue on all of these walks as the small creeks don't hold water for long after rain.

While there are no major canyons in the park, there are a number of lesser known canyons in the Newnes Plateau area, accessed off the Sunnyside Ridge Road. There is also a small canyon on the Genowlan Mesa. There are probably a number of smaller dry slots still waiting to be discovered.

There is some scope for mountain biking in the park. The Newnes Plateau area is accessed via the Sunnyside Ridge Fire Trail, and a number of old trails run north of this road, which mountain bikes can access. The area around Baal Bone Gap is also accessed via several rough fire trails, and mountain bikes are an option.