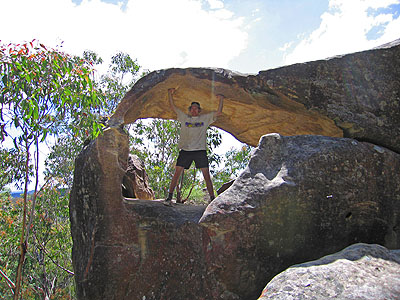 Well, someone has to stop Hollow Rock from collapsing!

The Colo River through much of its upper reaches is one of the wildest and least accessible rivers in the state. This walk explores some of the section below its junction with Wollemi Creek. While the distances involved are not great, most of the section of the walk in the gorge itself is off track, and slow going. A degree of rock scrambling and exposure is required to descend from Crawfords Lookout into Wollemi Creek. The pass and track can also be difficult to find. This is a wilderness walk and parties need to be self-reliant.

One challenge with doing the walk over two days is that campsites in the gorge can be difficult to find. The walk can also be done over three easy days. With a short day at each end, camping at the Colo/Wollemi Creek junction, and near the Dooli Creek junction is possible.

This walk used to be named "Crawfords Lookout to Boorai Creek", but the new version of the maps has Dooli Creek being the main creek that joins the Colo, with Boorai Creek just a tributary of Dooli Creek.

Drive about 17km north of the Ampol service station at Colo Heights, passing the Grassy Hill Fire Trail (hard to spot), until you see another fire trail on the left. Both of these fire trails are during the overtaking lane on the road. Turn into this and follow it for 13km until you reach a parking area, where you should park your car. Note that after rain, this fire trail has a couple of boggy sections that may prove difficult for 2wd cars. 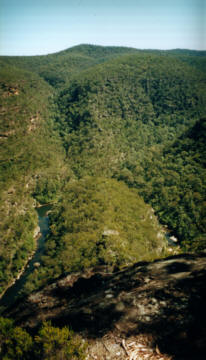 Take the track on the north side of the car park, which continues north for 300m until you reach Hollow Rock, an impressive wind eroded boulder. Just past Hollow Rock, head left down the hill and you should pick up an old trail that eventually leads back to the main fire trail. Follow this for 200m to a junction where you should see a trail to the right, blocked by a large log. Take this track. It leads up to the top of a hill after about 800m. At the top, there is an obvious main track that continues straight ahead (WSW, not marked on the topo). However, you should take the track to the right (north), which is less obvious. It heads north and then north-west, narrows and heads downhill, following the ridge for a couple of kilometres.

As you near the cliff edge, cairns may start appearing. Some of these are more confusing than helpful, as they end up marking multiple routes. Generally speaking if you keep to the main line of the ridge, or just to the left, you should have no problems. Eventually you reach the cliff edge (this should be pretty obvious)! 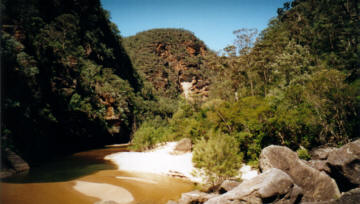 A typical stretch of the Colo River gorge

Crawford's Lookout is on the south side of the cliff edge, and has superb views over the Colo River and Wollemi Creek. By traversing around the cliff edge to the north for about 200m, you will find the pass (Bob Buck's Route No 1) at AMG697242, currently marked by a cairn. The route down is very steep, and a little exposed in places. It is usually marked by cairns the entire way, though the cairns can at times be misleading. There is a small amount of scrambling at the very top, to get down a short tricky corner, and a short distance down to descend a small ledge. The track diverges once or twice, and there are multiple exit points at the bottom. The track zigzags, generally heading towards the nose of the ridge, until the last section which descends north into Wollemi Creek. Including lookout stops, allow at least 3 hours from the car park to the bottom. Be careful of another cairned route down that follows the minor ridge to the north - this is not the one to take.

Once at the bottom, cross to the right bank (facing downstream) of Wollemi Creek, and walk/scramble around to the junction with the Colo River. There are usually large sandy flats here which are good for camping. However, if doing the walk over two days you will probably need to press on.

From here you can mostly walk in the river to about AMG708218 (all references to Six Brothers 1:25000 map). After this there are a couple of stints on the bank before AMG706212 to avoid long pools. The right bank is best. After this you pretty much need to be on the right bank all the way to the foot of Boorai Ridge. Possible camping spots in the gorge include just downstream from the creek junction at AMG708218, and around the bottom of the ridge at AMG710213. However, camp sites are on sandy flats, and can come and go with the floods, so there is no guarantee that good spots to camp will be consistent from trip to trip. 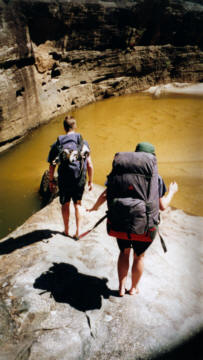 Negotiating one of the trickier sections of the gorge ... without swimming, anyway!

The route out starts about 500m downstream from the rapids, and 100m upstream from Dooli Creek (Bob Buck's Pass 7), just downstream from a small gully. The track is reasonably clear, if steep, all the way up to the top of the ridge. Continue along the crest of the ridge, down into a saddle and up the hill to join with an old fire trail. It is possible to follow this fire trail back to the main fire trail about 200m east of the car park. However, it winds in and out of gullies and is overgrown in places with blackberries. Better is to stick to the ridge line at AMG718211, where the fire trail starts to contour around to the right. A short steep climb brings you to the top of the ridge, where a track can be followed back to where it rejoins the fire trail at AMG727227. From here the trail heads north back to the main fire trail you drove in on. This last section is heavily vegetated, with plenty of nettles, and the right track is not easy to find. It emerges about 200m east of the parking area. 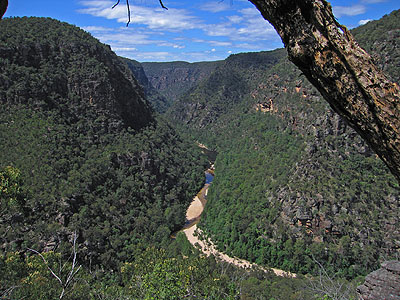 Looking back up the Colo from Boorai Ridge

A short walk to a spectacular lookout over Wollemi Creek and the upper Colo River.

A challenging river walk along the lower reaches of the Colo River.

A relatively easy route to the magnificent Colo River, with good swimming and the option of camping.

One of the easiest routes to the Colo River. A lovely pool and beach make it a delightful spot for swimming, although it is a decent climb in and out.

A useful little book with a number of less well known walks in the one of the state's biggest wilderness areas.