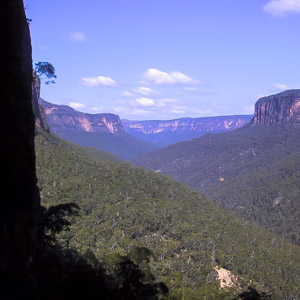 The majestic cliffs of the Grose Valley, from the end of Yileen Canyon, Blue Mountains National Park

The Grose Valley lies at the heart of the Blue Mountains National Park, and the upper Grose is regarded as the cradle of conservation in NSW. At the centre of the valley lies the magnificent Blue Gum Forest, the site of which was the first major conservation battle in the state in 1931. Since then, almost the entire catchment has been reserved in the National Park. The main reason that the valley was able to escape development is the massive cliffs on either side. There are only a handful of easy passes into or out of the valley, and development has been limited to the cliff tops. Much of the valley has recently been preserved as wilderness, further protection for the chasms, canyons and cliffs that make up this spectacular landscape.

The Grose Valley is a bottleneck valley. It is wide in its upper reaches, around the Blue Gum Forest, before narrowing into the Kolonga Canyon, and staying narrow until it emerges on to the plains at Yarramundi. The Grose Valley is bounded to the north by Bells Line of Road, and to the south by the main road across the mountains, the Great Western Highway. The headwaters of the valley are at the Darling Causeway, and the river ends when it joins the Nepean River at Yarramundi.

Over the north side of the valley, the main entrance is via Pierces Pass, at the end of Pierces Pass Rd, off Bells Line of Road.

Further down the valley, the access is more difficult. There are various fire trails that head along ridges from the south, around Lawson, Linden, Springwood and Winmalee, though in general, vehicle access is prevented by locked gates. The best access is from Faulconbridge, along Faulconbridge Ridge where a walking track ultimately leads into the valley.

Entry into the valley in all cases must be made on foot, as none of the roads pass through the cliff lines.

The 550m cliff wall of Mt Banks used to be a very popular abseiling route. However, in 1996 the NPWS closed the route and chopped the bolts, citing erosion on the route and scarring visible from Perry's Lookdown as the reasons. It remains closed today. There are plenty of other abseils into the valley, but most are to get to the start of climbs, or from the end of canyons.

The Grose Valley offers a variety of walks for bushwalkers. For the less adventurous, there are numerous walks along the cliff tops, particularly in the Blackheath area, and many fantastic lookouts. For the keen walker, a trip into the valley is essential. Numerous passes exist, most of them steep, most leading eventually to the Blue Gum Forest. Some of the popular routes into the valley include Rodriguez Pass from Evans Lookout, the Govetts Leap Track, Perry's Lookdown, Victoria Pass, Lockley Pylon and Pierces Pass. These all involve a descent of six hundred metres or more, and the consequent climb out.

The Grose River has many large rocky blockups and cannot realistically be kayaked except for possibly the very lowest reaches near Yarramundi. The tributaries are all too small for canoeing.

Many canyons can be found in the streams that run into the valley from the north and the south. Popular canyons include Mt Hay (Butterbox), Fortress Creek and the Grand Canyon on the south side, and Yileen and Dalpura on the north side. Further down the valley, Carmarthen Brook flows into the Grose River, and in its tributaries can be found Claustral, Thunder and Ranon canyons, all spectacular, deep, dark chasms.

The Grose Valley has been climbed in since the early 1930s, with Dr Eric Dark and the Blue Mountaineers. Given the huge amount of rock, it is surprising that there is not more rock climbing in the valley. The difficult access to many areas probably deters many. Most of the Grose is adventure climbing. Many climbs involve rapping in, and often the only way out is to climb, so leave a rope if you have any doubts. Also, the size of the cliffs mean that there is usually suspect rock at some point in a climb. The most popular area is probably Pierces Pass, which has a number of long classic routes. Other areas include Victorialand and Ikara.

The Grose Valley has few loop rides as most of the fire trails follow ridges which stop at the edge of the escarpment. There are a reasonable number of out-and-back rides, including many of the ridges in the lower Blue Mountains. Linden Ridge, Dawes Ridge and Faulconbridge Ridge are a few. Springwood Ridge and Shaws Ridge can be combined with the Blue Gum Swamp trail to create a good loop ride in the Winmalee area. The Mt Hay Road can also be ridden for quite some distance. Bikes can be useful in getting to the start of some walks, climbs or canyons as gates on some management trails are locked to cars.

An easy and short walk to a fantastic lookout over the Grose Valley.

An easy walk to the impressive Hanging Rock near Blackheath, and to Baltzer Lookout over the Grose Valley

An easy walk to impressive views over the Grose Valley and Govetts Gorge.

The classic walk into the Blue Gum Forest, with camping on grassy flats under the magnificent blue gums

Faulconbridge Ridge to the Grose River

A climb of one of the prominent peaks of the Blue Mountains, with excellent views of the Grose Valley from its slopes.

A short but steep walk to a series of pretty cascades on Victoria Creek.

An excellent walk showcasing a variety of the best scenery in the Blue Mountains.

Govetts Leap and the Horse Track

Visit some of the most spectacular parts of the Grose Valley on this challenging but rewarding walk.

A challenging and scenic route in to the Blue Gum Forest

A pleasant and easy walk with spectacular views

Superb views of the upper Grose Valley, and a good mix of on track and easy off track walking in this less visited area

A steep descent to the Grose River through a delightful rainforest ravine, with a visit to the magnificent Blue Gum Forest.