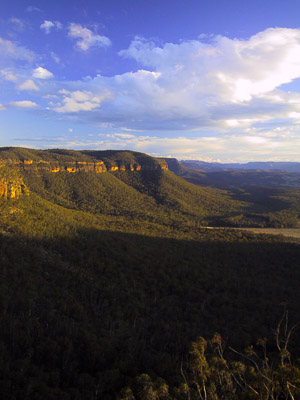 The cliffs of Narrow Neck, and the Megalong Valley, from Tuckers Lookout at Medlow Bath

Medlow Bath is a small town on the Great Western Highway west of Katoomba. It would be relatively unknown if not for the magnificent old Hydro Majestic Hotel that perches on the cliff tops above the Megalong Valley. The railway station was originally named Brown's Siding before businessman Mark Foy developed the hotel as a 'hydropathic establishment' in the early 1900s, and it eventually acquired its current name.

Foy also spent much money constructing a network of walking tracks in the bush around the town and many of these survive to this day. There is plenty to explore in the area, certainly enough to occupy several days of walking.

Medlow Bath lies on the Great Western Highway about 6km past Katoomba as you head west. The Hydro Majestic Hotel is on the left side of the road before you cross the railway line, and is impossible to miss.

There is a major network of tracks around Medlow Bath, mostly in the area between the Hydro Majestic and the cliffs. These are generally well constructed, although in the cases of the ones to get below the cliffs, somewhat exposed. A pleasant day's walk can be had wandering around the paths above the cliffs, with excellent views of the Megalong Valley and Shipley Plateau. If you are comfortable with a bit of exposure, visit the Colosseum, or take the walk down to the Blackheath Glen Picnic Area down in the Megalong Valley.

While there are no campsites in Medlow Bath itself, there is a good car camping area down in the Megalong Valley easily visible from Tuckers Lookout. To get there by car, drive down the Megalong Rd from Blackheath and keep an eye out on your right after about 6km. The road stops winding here so you'll know pretty quickly if you've gone past it.

You could also walk there from Medlow Bath as it is only about 1km as the crow flies, and maybe 3km walk.

The one canyon generally accessed from Medlow Bath is Juggler Canyon, in the creek to the west of (the new) Point Pilcher. However, it is not a great canyon and is better combined with the Grand Canyon for a good day's trip.

There are numerous crags around the Medlow Bath area, as well as a good bouldering site. There are a number of sport crags down the western end of the cliffs off Belgravia St, and some less well known trad cliffs to the east. See "Blue Mountains Climbing" (Pircher/Carter) or the SRC guide "Rockclimbing in the Upper Blue Mountains" for more information.

Apparently there is a shortish single track that runs below the Hydro Majestic Hotel, largely on the walking tracks. I don't know what the status of this is as far as legality goes. It is only about 4km all up.