The waterfall at the Colosseum

The area below the Hydro Majestic Hotel is riddled with old constructed tracks, many from early this century. This walk takes a number of those tracks to an amphitheatre known as the Colosseum.

As you drive into Medlow Bath from the east on the Great Western Highway, take the exit to the left just before the road goes over the railway line past the Hydro Majestic. Turn left into Belgravia St, the first street on the left, and park near the end.

Alternatively, catch the train to Medlow Bath. Cross to the side of the road with the Hydro Majestic, and turn right along the footpath. The first street on your left is Belgravia St.

The track starts from the end of Belgravia St, on the right hand side, where a sign says "Track". Follow the track as it switchbacks down the hill. Pass a small track on the right, and ignore another track to the rightabout 20m further on. The latter has an old metal sign nailed to a tree that used to say "Marks Tomb" (it now just says "Tomb"). 50m past this, turn right at a T-intersection. After about another 100m you will see a faint track on your right, which you should take. This goes down some old sandstone stairs and shortly reaches a saddle. Note a track continuing to down the gully to your left from the saddle, which you will take when you return. 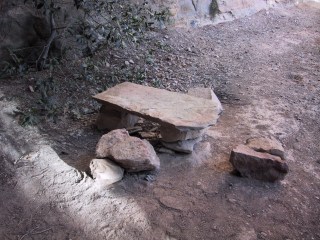 An old table and chairs at the Colosseum

Cross the saddle on to the outcrop on the other side, and head out to the end to Tucker's Lookout for excellent views of the Megalong Valley and Shipley Plateau to your right. If it is a clear day, you may be able to see the Wild Dog Mountains and the Kanangra peaks in the distance.

Return to the saddle, and head down a zigzagging track through the cliffs, which swings right at the bottom under the lookout. Continue down the track which heads to the edge of the cliff on carved sandstone steps. Be careful in this next section as the track is quite exposed, although not difficult.

The track crosses a narrow ledge and into a cleft, descending wooden steps at the bottom. There is then a short descent down a metal ladder. Continue down more formed steps along the cliff edge. There is wire netting and metal poles between you and the cliff, but they are more decorative than protective.

The last bit is a little tricky as a bridge across the gap is no longer there. It is not too tricky to traverse as there are some hand and foot holds, but be careful. You immediately reach a track junction with a painted sign, one way to the valley, the other to the 'coliseum', an acceptable alternative spelling of Colosseum. Take the track to the right to the valley. 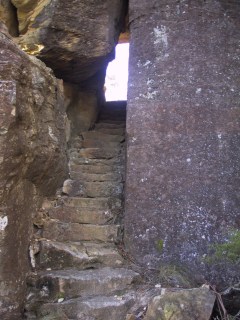 A cleft in the rock with sandstone steps

The track descends through another cleft in the rock, down old stone steps. It then winds along under spectacular cliffs for about 600m. The track is reasonably exposed in some places, so take care, particularly when wet. A slip could mean a nasty fall. There are good views of the Megalong Valley in this section. There has been a recent landslip shortly before the Colosseum so take extra care here. Eventually you reach the Colosseum, a huge amphitheatre under the cliff, with the creek arching out over a dry area where you can sit at an old stone table and have a break.

After a break here and a bit of a look around, retrace your steps back to the car.

Alternatively, it is possible to locate an old track that leads down to the valley track, although the track is difficult to follow, and in poor repair. It starts on the left side of the creek, and crosses to the right about half way down. When you reach the valley track, head right, and follow the track back to the junction with the painted sign, and thence back to the car.