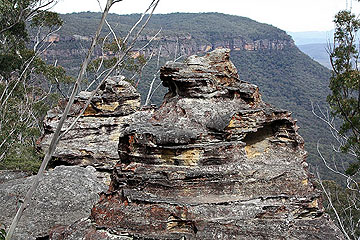 Two of the Three Brothers

The Hydro Majestic Hotel was built around the turn of last century, and is visible from the Megalong Valley. A network of old walking tracks was built below the hotel, and many of these can still be found today.

This walk explores many of the cliff top tracks. Most of these tracks are still in fairly good repair, so you should be able to follow them easily.

As you drive into Medlow Bath from the east on the Great Western Highway, take the exit to the left just before the road goes over the railway line. If you pass the Hydro Majestic Hotel, you have gone too far. Turn left into Bellevue Cres, and park opposite the fire trail, about 100m down the street.

Alternatively, catch the train to Medlow Bath. Cross to the side of the road with the Hydro Majestic, and turn left along the footpath. Bellevue Cres is the first street on your right. It is about 700m from the station.

Head down the fire trail, which takes a sharp right hand turn after 50m and contours steadily down around the top of a small creek. After crossing the creek on a stoney section of fire trail, keep an eye out for the power lines as they cross the fire trail. About 100m after passing under the powerlines, look for another fire trail branching off to the left. Follow this up to the next power pole and pick up the foot track which heads up and over the flat ridge. As it descends along the side of the ridge, look down to your left. You should be able to see a series of rocky outcrops. These are the rock formation known as the Three Brothers. While not in the same league as the Three Sisters, they are worth a look. Another foot track branching off to the left leads down to the first of the Three Brothers after about 50m. Before returning to the main track, note the impressive overhanging cave in the cliffline a little further down the gully to the left. 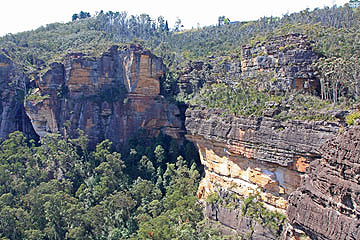 Cliffs above the Colosseum

This is a short out and back trail leading to the various remains of the old flying fox that used to haul goods from the Valley Farm up to the Hydro Majestic Hotel. On your left as you walk along the fire trail you can see the old pulley wheels. On the right is one of the anchors. Another anchor is a little further along. The fire trail ends and a narrow track follows a ledge to a set of wood and metal stairs that descend a small gully. The track continues down to an impressive lookout over the valley and a third flying fox anchor.

Returning to the main fire trail, continue along until it ends after 100m and pick up the foot track that crosses the small creek and passes through a swampy area. This was the old Hydro Majestic pool. Note the brick wall of the pool damming the creek. Head up the hill on the other side. There are good views up to the Hydro Majestic. About 400m up the hill the track forks. Take the left fork, which heads along the slope for 150m to another junction. Just up the steps there are two large overhangs, one that has been converted into a room by virtue of a sandstone wall with door and window. 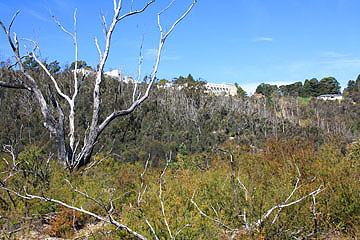 The Hydro Majestic from down near the cliff edges

Continue past the two overhangs and rejoin the main track after 30m. Follow this track, which appears to peter out a bit as it crosses a sloping swampy section, but is fairly clear after that. There is another track junction after about 300m. Take the left fork. This heads down past an old platform constructed from sandstone to the cliff edge.

Note a track on the right about 30m before the cliff edge.

There are excellent views from the cliff edge down the Megalong Valley, and of the cliffs around the Flying Fox area.

Head back to the track on your right (now on your left). Follow it along the cliff edge. After passing around the top of a small gully you reach another good lookout. A similar distance again brings you to another lookout. Just up the track from here is the Sunbath, which as its name suggests was a small pool in the sun. Continue for 150m to a clearing, passing a turnoff to the left after 50m, and another to the right after another 50m. At the small clearing, take the turnoff to the left - this is the Wonderland Track. Almost immediately, another track branches off to the left. This leads down to a cave after 300m, with views over Blackheath Glen, and is worth the detour.

Continuing along the Wonderland Track, another track branches left after 500m. This leads to Marks Tomb, an interesting hollow rock formation. The Wonderland Track continues for another 1km until it hits a service road (Station St). Turn right and walk back to the Great Western Highway, turning right to get back to your car or crossing the highway to get back to the station.

An excellent resource for walkers, with a variety of walks within easy reach of Sydney