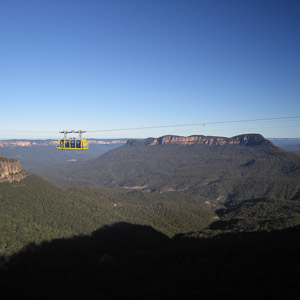 Looking out across the Jamison Valley towards Mt Solitary

The Jamison Valley is the valley below the major Blue Mountains towns of Katoomba, Leura and Wentworth Falls. When you look out to Mt Solitary from any of the numerous lookouts along the cliff tops, you are looking over the Jamison Valley. The valley is flanked by large sandstone cliffs on three sides, with Mt Solitary partly blocking the only gateway through the cliffs. Jamison Creek, which becomes the Kedumba River flows between the eastern side of Mt Solitary and the Kedumba Walls, into the Coxs River and Lake Burragorang.

The Jamison Valley has a long history of logging and mining stretching back to the 1880s. Coal and oil shale was mined from seams in the bottom of the cliffs below Katoomba, and many of what are now bushwalking tracks were built as access routes for miners. Most of the coal was worked out by the early 1900s, and the valley slowly reverted to its current state.

In and around the Jamison Valley is one of the main foci of bushwalking in the Blue Mountains, as there are many options for walks both short and long.

If catching the train to Katoomba, Leura or Wentworth Falls Station, it is around 2km to the cliff edges. There are buses from some of the stations to closer points.

The western side of the valley can be accessed via the Golden Stairs, on Glenraphael Drive off Narrow Neck Peninsula. The main pass on the eastern side is Kedumba Pass, which is accessed off Tableland Road in Wentworth Falls.

Two fairly popular multi-pitch abseiling trips, Malaita Point and Malaita Wall, descend into the valley from near Scenic World at Katoomba. In addition, the Castle Head abseiling route descends Castle Head, off Narrow Neck, finishing up near the Ruined Castle.

There are so many walks in this part of the Blue Mountains it is hard to know where to start. The National Pass at Wentworth Falls is one of the most popular moderate-grade walk, and is highly recommended, though it can get quite busy. The Cliff Top Track runs from Katoomba to Sublime Point at Leura, and short sections can be done as the track passes close to the roads for much of its length. Leura and Katoomba Falls can be visited at the both the top and the bottom of the falls. There are many passes leading through the cliff lines. Most popular ones include the Golden Stairs, Furber Steps, Giant Stairway (past the Three Sisters), Leura Cascades and Kedumba Pass. Less well known include Roberts Pass, Gladstone Pass, Slacks Stairs and Copeland Pass.

The Federal Pass Track runs along the bottom of the cliffs, linking a number of the passes that descend the cliff lines. Continuing past the Golden Stairs, the Mt Solitary walking track leads on to the Ruined Castle, an easy but spectacular day walk, and to Mt Solitary.

The main overnight walk in the Jamison Valley is Mt Solitary itself. This impressive sandstone mesa dominates the views from the mountain towns and makes a good, if sometimes busy, spot for a pack walk. It can also be visited as a day walk.

Empress Canyon is the only well-known canyon that drains into the Jamison Valley. Other creeks that drain off the Kings Tableland, such as Waterfall Creek, may have short sections of canyon in them. There are some other short slots that can be seen from walks such as the National Pass (Den Fenella for example) and Prince Henry Cliff Walk.

One of the best and most popular walks in the Blue Mountains, with a great variety of scenery and spectacular views

While this website is a work in progress, it focuses specfically on the Jamision Valley. It has notes and maps for over 10 walks, and descriptions of a number more.