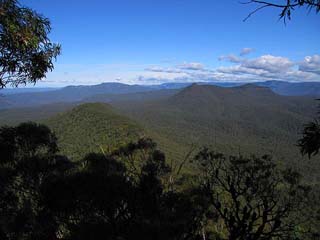 Mt Debert, with Mt Mouin and Mt Warrigal in the background, from Clear Hill

Narrow Neck Peninsula lies south west of Katoomba and can be seen stretching out between the Jamison and Megalong Valleys from numerous lookouts along the Katoomba cliffs. It used to be a popular bushwalking area in the 1920s and 1930s due to the easy access from Katoomba providing a route into the Wild Dog Mountains. In recent years there has been renewed interest in exploring many of the old passes off Narrow Neck. This walk explores two of those passes.

Tarros (originally spelled Taros) Ladder lies off Clear Hill at the very end of Narrow Neck. The route from Clear Hill to the bottom of the cliff was discovered by bushwalkers Frank Duncan, Ern Austen and Jack Debert in June 1928, but it had likely been used in the late 1800s by oil shale prospectors. The lower section involves a steep descent of around 10m through a small cliffline, these days aided by climbing spikes and rungs.

There are in fact two ways to negotiate the lower cliffline. The second was discovered by a party led by Alan Rigby, on the day following the descent by Frank Duncan's party. This involves only walking, and is known as the Wallaby Track.

Confusingly, many maps show these as Duncans Pass and Tarros Ladder.

However, Frank Duncan's party in fact descended the chimney where Tarros Ladder now lies, and as such Tarros Ladder is just the bottom part of Duncans Pass. A real wire and wood ladder was installed by Walter 'Taro' Tarr in 1933, but it was damaged in a bushfire in 1939, and replaced with the current climbing spikes.

Carlon Head is the impressive point overlooking Carlons Farm. It was first descended in 1932 by Harry Whaite and members of the Warrigal Club. They were planning to descend Clear Hill but a navigational error meant they ended up at Carlon Head instead! 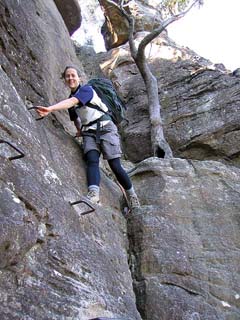 The walk starts and finishes at Dunphys Camping Area (Carlons Farm/Green Gully), in the Megalong Valley, although other options are possible (see notes).

To get there, drive to Blackheath, and take the left turn (coming from Katoomba) across the railway line at the traffic lights in town. Turn left again immediately, and then take the first right. After about 700m take a left turn, following the sign to Megalong Valley. The road is windy for the next few kilometres. About 13km after the turnoff you cross Megalong Creek at the Old Ford Reserve bridge. Continue along the (now unsealed) road for about 7km, through a couple of gates to reach the old farmhouse of Green Gully. Cross the bridge and head up the hill on the other side. At the T-junction at the top, turn left, and the parking area is at the top of the next hill.

From the parking area, cross the stile at the south east corner, and continue up the steep hill along the Bellbird Ridge Management Trail. It is about 1.5 km to a major junction with the Medlow Gap Management Trail. Note this point for the return journey. The ascent of Carlon Head from the junction is described below.

Once at the top of Carlon Head, pick up the obvious track that leads up the ridge and make your way to the fire tower on Bushwalkers Hill.

Turn right on the main fire trail and continue out to the end at Clear Hill, where there are good views in all directions - somewhat marred by the transmission wires that run between Clear Hill and Mt Debert. The descent via Tarros Ladder is described below.

Continue down the ridge for a short distance to the start of the fire road at Little Cedar Gap. Don't take the road, but instead climb the ridge in front of you. This track is scenic and takes you over the top of Mt Debert and eventually down to Medlow Gap. 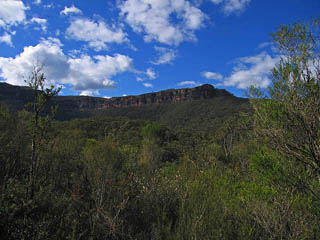 An alternative route to Carlons Farm from Medlow Gap would be to head east and then north via Black Horse Ridge, Breakfast Creek, Carlon Creek, Green Gully (Carlons Farm). This would add a steep 300m climb and descent, but the distance is fairly similar.

If you have mountain bikes, another alternative would be to start at the locked gate on Narrow Neck and to ride to and from the fire tower on Bushwalkers Hill. It is about 8 km each way, and the bikes could be left locked at the fire tower. The rest of the walk would be about 13 km via the Medlow Gap Management Trail and 17 km if you took the alternative route via Breakfast and Carlon Creek.

Carlon Head (via Mansons Ladders) is an exposed and potentially dangerous pass on to or off Narrow Neck. Often known as Carlons Chains, it is not for the inexperienced. The NPWS lists it as a climbing route, not a bushwalking route.

There are three main pitches of climbing, all with chains, spikes and rungs. The NPWS has installed signs advising that the bolts, chains and handholds are unsafe. You will need to use your judgement as to whether to proceed or not, and whether and how to use ropes. 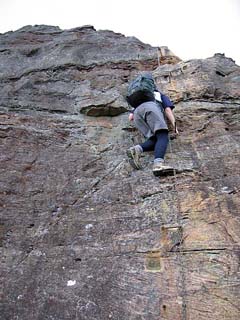 The first pitch is about 20m back from the nose on the left side of the head, and is probably the easiest of the three pitches. Once up, traverse along the left side until you see a chain hanging from a tree on your right, and scramble up to the bottom of the second pitch, a very exposed climb. Continue up the hill to the third pitch, which has several short sections. If you are descending, pick up the track that starts behind the toilet at the fire tower at Bushwalkers Hill and make your way out to the head.

All of the pitches involve some awkward moves and a fall on any of the pitches would be very nasty, if not fatal. Be warned, a number of the rungs have broken off over recent years, and others may be loose. You may be advised to abseil it first prior to climbing it - 2 x 20m ropes needed. If you are climbing it, you may want to take 20m of rope and set up a belay.

After the Golden Stairs, this is probably the most used pass off Narrow Neck. It enables a descent of about 10m down a steep rock corner. A length of cord may be useful to lower packs.

From the end of the fire trail at Clear Hill, pick up the track that starts on the right. This descends a cleft with a metal ladder (this is not Tarros Ladder) and a series of ledges involving easy scrambling, before reaching a flat rock platform. A camp cave is passed on the way down. A couple of spikes can be seen on your right. This is Tarros Ladder (which is part of the original Duncans Pass). It is exposed but relatively straightforward, except for the very bottom, which is a bit tricky, especially for short people. There are spikes and stemples all the way down.

There is an alternative route known as the Wallaby Track (marked incorrectly as Duncans Pass on some maps) which heads around the nose to the left from the top of Tarros Ladder, and descends a minor gully after 150m. Traverse back right under the cliffs to the nose to rejoin the usual route. This does not involve any climbing. There is a faint footpad. 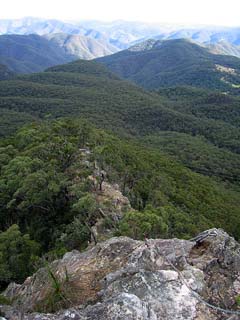 A good introduction to the Wild Dog Mountains. Some creek hopping and ridge walking add variety to some spectacular scenery.

An excellent walk along two of the shale ledge passes of Narrow Neck, with great views on a clear day

A walk with lots of variety, visiting a famous lookout and home of the Bushwalkers War Memorial

A solid walk to the highest of the peaks in the Wild Dogs, with great views