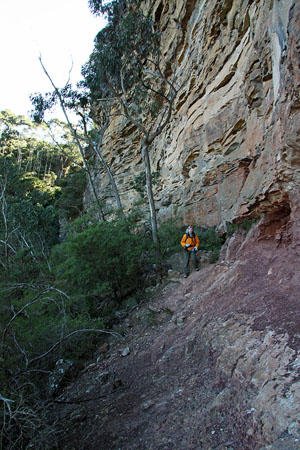 Near the start of the shale ledge that Dunphys Pass follows

Narrow Neck Peninsula is a thin plateau that divides the Jamison and Megalong Vallies, south of Katoomba. It was a popular area for bushwalking before a fire road was driven all the way to the end in the early 1960s. In recent years there has been renewed interest in exploring many of the old passes off Narrow Neck. This walk explores one of the old bushwalking passes, and another that was rediscovered more recently.

Dunphys Pass is possibly the first bushwalkers pass discovered on Narrow Neck. Most of the early passes followed the miners' routes - Redledge Pass, Tarros Ladders and the Golden Stairs. It was discovered in 1926 by a party including pioneer bushwalkers Myles Dunphy and Raphael Doyle. 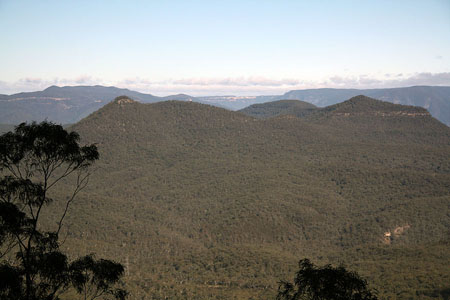 Views of the Wild Dogs, and all the way to Kanangra from Dunphys Pass

The walk starts and finishes at Dunphys Camping Area in the Megalong Valley.

To get there, drive to Blackheath, and take the left turn (coming from Katoomba) across the railway line at the traffic lights in town. Turn left again immediately, and then take the first right. After about 700m take a left turn, following the sign to Megalong Valley. The road is windy for the next few kilometres. About 13km after the turnoff you cross Megalong Creek at the Old Ford Reserve bridge. Continue along the (now unsealed) road for about 7km, through a couple of gates to reach the old farmhouse of Green Gully. Cross the bridge and head up the hill on the other side. At the T-junction at the top, turn left, and the parking area is at the top of the next hill.

From the parking area, cross the stile at the south east corner, and continue up the steep hill along the Bellbird Ridge Management Trail. It is about 1.5km to a major junction with the Medlow Gap Management Trail. Turn right on the fire trail, and follow it for 1.5km, crossing a couple of small creeks, to the foot of the main ridge leading down from Glenraphael Head. 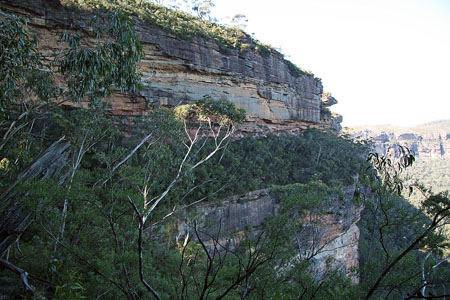 Dunphys Pass follows the halfway ledge for a long distance

Climb up the open ridge until you can see the bottom of the cliffs of Glenraphael Head. Skirt around under the cliffs, through fairly thick undergrowth, trending upwards to get into the gully at GDA462568.

Climb up the gully until you can see a 5m waterfall blocking progress up to your left. Head around to the right. A small loose scramble straight up, or exposed traverse around to the right, brings you on to the shale ledge. There is a logbook in a jar at the start of the ledge.

Follow this around past the nose and into another gully, again with a waterfall preventing access. Cross over the gully and continue along the ledge, around another point, and into the next gully. There are excellent views of Clear Hill, Mt Mouin and on a clear day, all the way to Kanangra Walls from many points on the ledge. Continue up this second gully, through at times thick scrub to a small clearing with a cairn at GDA465568. From here there is a rough track, if you can find it. It heads roughly north east then north towards Glenraphael Swamp, then skirts to the north west alongside the swamp until you can cross it easily. Head up the hill for about 200m to the road. 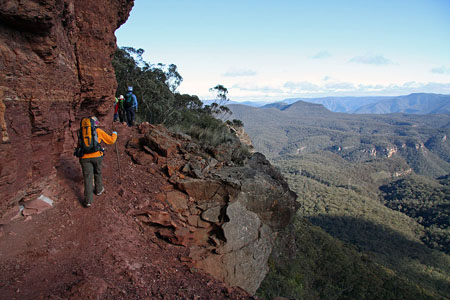 A narrow section of Harmil Ledge

Walk along the road for 500m, a little way past the 1044 point. Head WSW from here aiming for the minor gully at GDA463574 that feeds into Sliprail Creek. The descent into the gully is fairly steep and slippery. Just before the creek goes over the cliff, head left on to the shale ledge. There is a logbook on a shelf near the start of the ledge. Continue along the ledge to the end. The views across Breakfast Creek to the west are spectacular.

At the end of the ledge, walk right out to the nose, and look down to the left. A steep 12m drop leads down to a rock platform. A rope around the small tree near the nose is handy, though experienced scramblers can manage without. Descend the gully to the left and work your way around below the cliffs until you are back at the main ridge. Descend the ridge to the road and retrace your route in back to Green Gully. 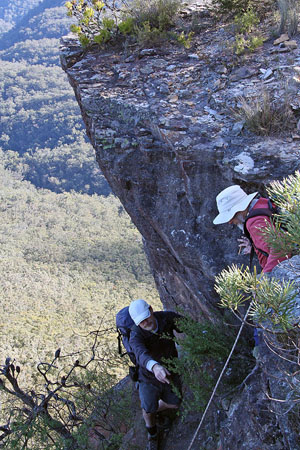 The scrambling descent off Glenraphael Head

A walk with lots of variety, visiting a famous lookout and home of the Bushwalkers War Memorial