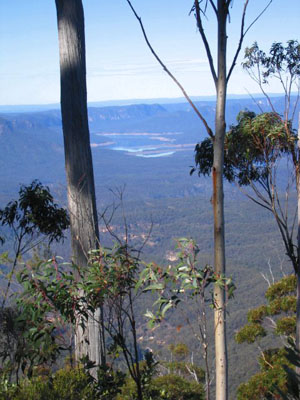 Views towards Lake Burragorang from near Walls Pass

Narrow Neck Peninsula is a thin plateau that divides the Jamison and Megalong Valleys, south of Katoomba. It was a popular area for bushwalking before a fire road was driven all the way to the end in the early 1960s. In recent years there has been renewed interest in exploring many of the old passes off Narrow Neck.

This walk descends Cedar Head via Walls Pass, and then returns via the Golden Stairs. Walls Pass involves a steep 10m descent via chains, so walkers need to be comfortable with exposure and rock scrambling. There is little or no track for most of the section between the bottom of the pass and the Ruined Castle, so strong navigation skills are essential. This is a walk for experienced walkers.

Walls Pass was probably first used as a miner's pass via the Wall brothers, who had a mining lease below Cedar Head in the late 1880s. It was rediscovered by Wilf Hilder, and equipped with chains by Bushwalkers Search and Rescue in the 1960s.

The Golden Stairs is also an old miner's pass, but well-known to bushwalkers venturing to the Ruined Castle and Mt Solitary. It is probably the most straightforward of all of the Narrow Neck passes, as it has been heavily improved with steps and rails. Its name comes from an old hymn that the miners used to sing as they climbed the stairs.

The walk starts at the locked gate on Narrow Neck. 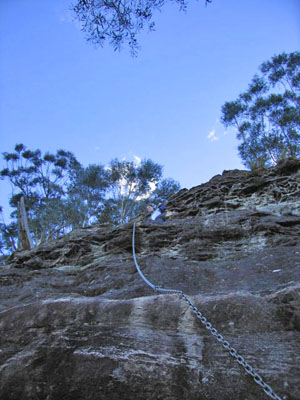 Looking up the Walls Pass chains from the bottom

Head along Cliff Dr from Scenic World in Katoomba. After passing several lookouts, turn left into Glenraphael Dr, which immediately turns into a dirt road. Follow the road out along Narrow Neck to a locked gate after 2.6km. The dirt road is often quite potholed, and two-wheel drive cars need to take care. At one point there is a steep section which has been cemented. The parking area is about 300m past this.

Alternatively, you can walk from Katoomba Station but it is about 5km each way to the parking area. However, there are buses from the station to places where it would be a shorter walk.

Walk out along the Narrow Neck Fire Trail for 7km to the fire tower at Bushwalkers Hill. Turn left and follow an old fire trail for 400m east. The fire trail peters out at about MGA471580 (Jamison). Follow the ridge north east and then roughly north to MGA475585, where you should find a large cairn, with a piece of wood pointing east. Follow a vague track east that leads down the steep gully and on to a wide rock platform. The chains for Walls Pass are on the right hand side of the platform.

The descent by chains is steep and tricky. The chain is angled near the bottom, and the last couple of metres is quite overhung, making for an awkward drop. The platform at the bottom is small, with room for only one or two people. If you have a large party, it can take a considerable period of time to get everyone down.

It is also possible to abseil the 10m drop, though the rope can be difficult to retrieve if everyone has abseiled. Use a long sling if needed. 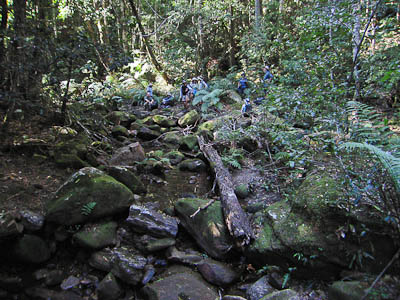 Down in Cedar Creek

At the bottom, scramble down off the platform, and follow a track north under the cliffs out to directly below Cedar Head, where there are dramatic views of the east side of Narrow Neck. Drop down into the gully to the south, negotiating small clifflines, and then traverse under the cliffs until you can get back to the nose of the ridge at around MGA479590. This is reportedly easier than trying to go directly along the ridge from below Cedar Head, which involves significant scrambling.

Once on the ridge, navigate carefully down the minor ridge to the north-east, then east, following it all the way down to Cedar Creek at MGA489596. There are some small clifflines around the 640m contour mark - these can be bypassed but may need some traversing to find a route through.

The pass into Cedar Creek is not that obvious from above, but is on the southern side of the point of the ridge, via a small gully. It is almost a walk down, with only easy scrambling. There is a large camp cave on the west bank of the creek only a short distance downstream.

To exit Cedar Creek, head upstream for 100m and climb out on the ridge to the north of the creek junction at MGA490597. This is a steep but open climb, unlike some other ridges in the area which are riddled with lawyer vine.

Continue along the track back to the main Mt Solitary Track, and turn left. 3km of walking brings you to the foot of the Golden Stairs (signposted) from where it is a short, hard slog up to Glenraphael Drive. Someone will need to walk the 800m back to the car at the locked gate. 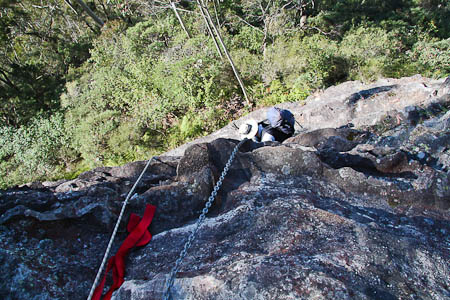 Walls Pass chains from above

360 degree views from the top of the Ruined Castle, one of the best easy day walks in the Blue Mountains.