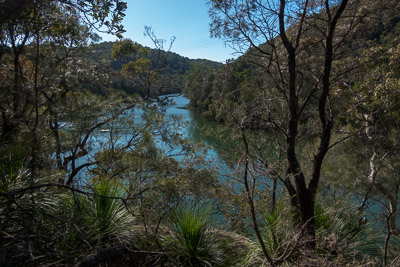 The west side of Middle Harbour between Gordon Creek and Rocky Creek is particularly picturesque. It also has the feeling of being quite remote, as the track in this section is rough and unmaintained. From the foreshores of Middle Harbour there is little sign of civilisation.

This walk connects up several tracks to form a route that can be walked station to station. There is around 3.5km of street walking in total.

The walk starts at Lindfield Station, on the North Shore (T1) line and finishes at Gordon Station, two stations apart on the same line.

The walk starts with about 15 minutes of street walking. Leave Lindfield Station on the east side, the side away from the Pacific Hwy, and turn left. Turn right into Woodside Ave, and then left at the end on to Nelson Rd. Follow this past Northcote Rd on the right, and Treatts Rd on the left, and you will reach an entrance to a bush reserve, Wombin Reserve, on your right.

Turn into the reserve and follow the track for 200m beside a small creek to Swain Gardens. Walk through the gardens, which is an English garden with a maze of paths, surrounded by bushland. Stay near to the gully at the bottom, and step over a small wall on to a faint bush track. Follow this track down though Seven Little Australians Reserve, named after the book, whose author, Ethel Turner lived in Lindfield as she was writing it. The track stays on the right bank of the creek, and is vague in places. If you lose it, you should be able to pick it up again near the creek. 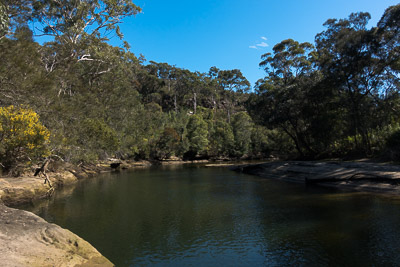 Right on the foreshore of Middle Harbour

The track becomes clearer near the bottom, and you reach a small picnic area. Just after this, at the T-intersection, turn left and cross the creek on a footbridge. At the next junction, turn left and follow the creek down to where it passes through a tunnel under the road. Note that this tunnel may be impassable after rain, in which case you can return to the other branch of the track which leads up to the road, and cross there.

On the other side of the tunnel, turn right to go up to the fire trail, and then left. The fire trail is part of the Two Creeks Track, which is followed for 1.2km (20 minutes) to a signposted turnoff on the left, to the Barrie St Track. Take this track, which winds down and crosses Gordon Creek on stepping stones, before climbing steeply up the other side to a T-intersection. Turn right on this, and follow it for 250m to a clearing where the old bridge used to be, and where the sewage pipe now crosses the creek. 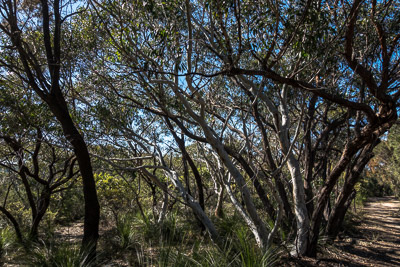 Twisted gums on the Pipeline Track

The track forks here. Take the right hand branch, which is much less distinct. This track continues above Gordon Creek before emerging on the slopes above Middle Harbour. For the next couple of kilometres, the track largely follows the foreshore, ducking up the side creeks in order to cross. The track is faint and not always easy to find. It may be marked by tape in places. In general, it is best to stay close to the harbour. There are a couple of spots where side tracks lead off up the hill to streets in Killara (Koola Ave and Kanowar Ave), and these should be avoided. This section is exceptionally pretty, an oasis of green and blue in the middle of a major city.

Eventually track heads up a larger creek, Rocky Creek, for a short distance, and crosses over at a shallow ford. The creek is quite wide, and you may get wet feet depending on how recently it has rained. Head back down to the harbour, and about 20m upstream, pick up the start of the Pipeline Track under the pipeline itself. This quickly reaches a clearing and becomes a fire trail, which can be followed up the hill to the houses after 1.5km, passing a turnoff to the Bungaroo Track near the top. Continue along a trail behind the houses for 1km, which eventually emerges on Hunter Ave, near Barra Brui Oval.

Then there is a 2.5km (40 minute) walk to the station. Continue along Hunter Ave, and cross directly over the roundabout on to Eucalyptus St, which first becomes Sage St and then Rosedale Rd. After crossing a couple of bridges, turn right on to Park Ave, and then left on to Werona Ave, which leads to Gordon Station.

A pleasant walk along the creeks and foreshores of Middle Harbour