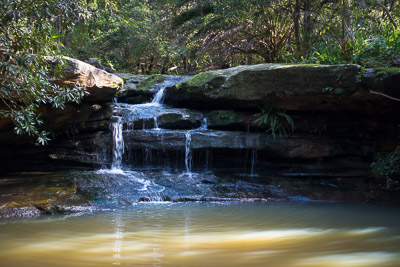 The Two Creeks Track runs along Middle Harbour from Roseville Bridge to Gordon Creek, and up to Seven Little Australians Park in Lindfield. This walk connects Rosevilla and Lindfield Stations via the Little Digger Track and a section of the Two Creeks Track.

The walk is good all year round, but is probably best in early spring for the wildflowers. It is also good after rain, as while the tracks can be a bit muddy, there are a number of pretty little waterfalls on Moores and Gordon Creeks which will be in good flow.

The track is mostly signposted, though there are a few places where the signposting is unclear.

The walk starts at Roseville Station, on the North Shore (T1) line and finishes at Lindfield Station, the next station up on the same line. 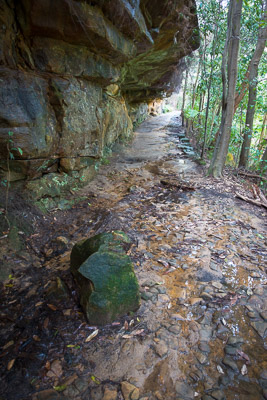 Cutting on the Two Creeks Track near Middle Harbour

The walk starts with about 15 minutes of street walking. Leave Roseville Station on the west side, the side away from the Pacific Hwy, and turn left. Take the first right into Roseville Ave and follow this down to Arterial Rd, a major road. Cross this carefully - visibility is not great. Continue along Roseville Ave for 150m, taking the second left into Amarna Ave. The start of the Little Digger Track is immediately on your left.

Follow the Little Digger Track down as it follows alongside Moores Creek. There is a small but pretty waterfall on the left a few minutes down the track. After a couple more minutes, the track heads up to the road on the right, turns left for 50m, then left again at the end of the road down a set of steps. Cross the creek and climb up the other side to the end of Luxor Parade. Continue along a lane between houses, then along the road, and right on to Carnarvon Rd.

At the end, the track begins again, though the signposting is fairly unclear. Best is to follow the fence line on the left for 30m to a clearing, turn right down the hill, and pick up the track where it is more obvious. About 5 minutes on, after the track has descended back to Moores Creek, there is a signposted side track to the aptly named Little Falls. Another 2 minutes further is Babbage Falls. 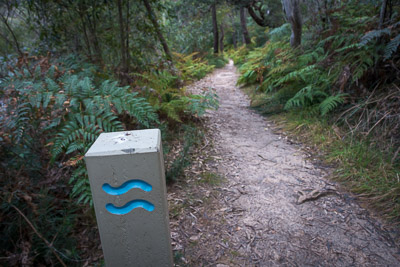 From here, the navigation is much more straightforward. Continue on the track on the same (left) side of the creek. The track is an old one, wide and well constructed with stone walling. There are lots of places in the next couple of kilometres to see the craftsmanship. There are some large overhangs that the track passes under before rounding the point and heading alongside Middle Harbour. A little way on, at a short section of boardwalk, ignore a branch track that leads up to Wellington Rd. The track then heads further inland to avoid a section of saltmarsh on the foreshore. Just past this, a large rock is a good spot for a break if you want one. 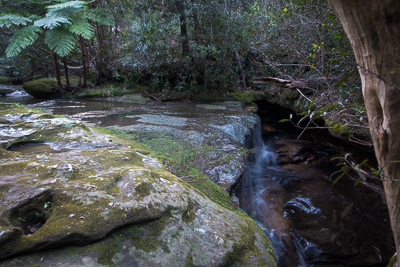 The track then climbs steadily up and away from the harbour, heading on to the slopes above Gordon Creek. There is a short detour to avoid a closed section of track, though it's unclear why. A couple of minutes on, the track meets the fire trail.

As you follow the fire trail, just before the second minor creek crossing, a faint track (not signposted) heads off to the right down to a pretty waterfall on Moores Creek.

Before you reach the road, head down a track to the creek on your right and through the tunnel under the road. In rain, this may be impassable, and you will need to cross the road instead. Cross the bridge, and then keep left, following the pretty creek up to a parking area and out to Tryon Rd. Turn right on Tryon Rd, and then right-left as it doglegs across Nelson Rd. This brings you out on Lindfield Ave opposite Lindfield Station.