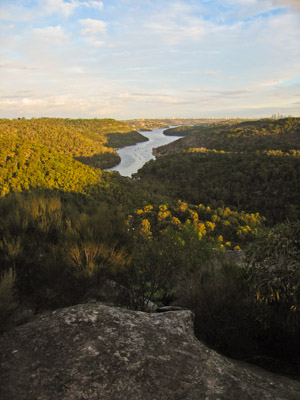 Garigal National Park is a relatively small park in the northern suburbs of Sydney. It has two main sections, separated by Forest Way in Belrose. The southern section, formerly the Davidson State Recrecreation Area, protects the catchment of Middle Harbour Creek, which flows into Middle Harbour. The park in this section mainly covers the areas directly around the waterways, and does not extend far on to the ridges. There is a picnic area next to Roseville Bridge in this part of the park. The northern section protects the catchment of Deep Creek, flowing into Narrabeen Lakes. This is a more substantial section of the park covering a block of bushland. The area is quite steep with small escarpments dissecting the sandstone plateaux.

Access to the southern section of the park is via numerous roads in the Roseville, Lindfield, St Ives, Belrose, Davidson and Killarney Heights areas. The picnic area is reached off Warringah Rd on the east side of Roseville Bridge. The northern section of the park abuts Forest Way in Belrose, Mona Vale Rd in Terrey Hills, and can be reached by fire trails off Morgan Rd in Belrose, and Wakehurst Parkway near Narrabeen Lakes.

Numerous short tracks run alongside most of the major creeks in the southern section of the park. It is possible to walk from Seaforth at the southern end all the way to Mona Vale Rd at the northern end, and there are many entry and exit points to both sides of Middle Harbour Creek along the way. The northern section of the park is less developed. It is possible to walk from Morgan Rd down to Narrabeen Lakes, one route via the ridge, and another dropping into Deep Creek along the way.

Canoeing in Middle Harbour and Middle Harbour Creek is particularly pleasant. With small craft it is possible to go as far up as Rocky Creek, and possibly a little further. Some of the tributaries such as Gordon Creek and Carroll Creek are also navigable for short distances. The waterways in the northern section of the park are too shallow and rocky for watercraft, although the nearby Narrabeen Lakes offers plenty of paddling.

The 2002 changes to NPWS legislation disallow climbing (and other adventure activities) in a national park unless the plan of management (PoM) specifically allows it, or you have NPWS permission. There is no mention of allowing climbing in the Garigal NP PoM. This presumably affects Crumbly, a bouldering area in Killarney Heights, and Elanora Heights, a sport climbing crag off Amaroo Ave in Elanora Heights, both inside the park. Just outside the park are a number of good climbing areas around Narrabeen, plus some crags above Middle Harbour such as Sissy Crag, Castle Cove and Middle Cove.

A pleasant walk along the creeks and foreshores of Middle Harbour