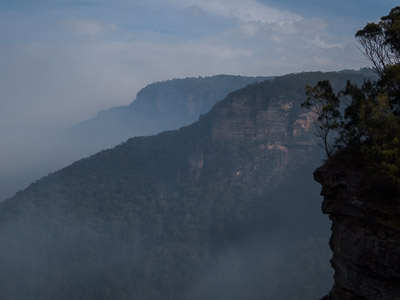 Below the cliffs of Wentworth Falls, there are three main tracks that connect the falls themselves with the Valley of the Waters: the famous National Pass, the Vera and Hippocrene Falls tracks, and Wentworth Pass.

Wentworth Pass is the middle of these, running along the bottom of the cliffs. While not as spectacular as the other two, it is still a worthwhile walk for those who've already done the other tracks in the area, and it gets less traffic than the National Pass.

The walk as described starts at the Conservation Hut, though being a loop walk, it can be started at several other points along the way. For extra interest, the notes include an additional section, being the eastern end of historic Lindeman Pass, by ascending Robert Pass to Inspiration Point, and then looping back to the Conservation Hut via Lilians Bridge. 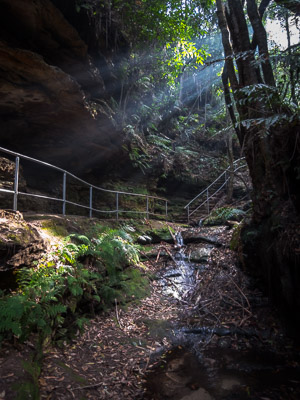 It is possible to walk to the Conservation Hut. from Wentworth Falls Station, but it adds about 5km (2.5km each way).

It is also possible to follow the Charles Darwin Walk which starts from Wilson Park on Falls Rd. This easy track follows the beautiful Jamison Creek to the top of Wentworth Falls. The loop below can then be joined. This adds around 6km (3km each way).

From the left side of the Conservation Hut, follow the main track that leads to the Valley of the Waters. Pass a turnoff to the Short Cut Track, and then, after plenty of stairs, turn left at one of the next two track junctions, signposted to the Overcliff Track. These rejoin just near Lyrebird Lookout, with good views down the valley.

Continue on the Overcliff Track to Breakfast Point Lookout, ignoring the turnoff left up the hill to the Short Cut Track. Keep on the track as it leaves the cliffs, and contours around into a gully. At a four way junction, you can take the 10 minute detour down into Den Fenella, a mini canyon, and out to a lookout on a ledge. 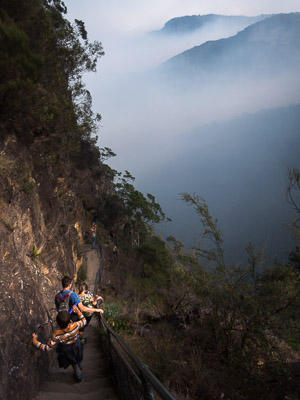 Back at the main track, pick up the Undercliff Track. As the name suggests, this takes a path beneath the top level of cliffs. It passes many overhangs and hanging swamps, and tends to drip water for a long time after rain. Follow this around several gullies, with a couple of lookouts. About 25 minutes from Den Fenella, you rejoin the main tourist tracks at a four way junction at Fletchers Lookout.

The main track crosses the top of Wentworth Falls on stepping stones at the scenic Queens Cascades, before reaching the top of the spectacular Grand Stairway. The descent to the halfway ledge of Wentworth Falls is extremely steep, with narrow walkways and stone steps that have been carved out of the cliff. After admiring the upper falls, cross the creek and head briefly up on to the National Pass, before taking a left turn on to the track to Slacks Stairs. Believe it or not, these are even steeper than the Grand Stairway, with metal cages to prevent you from falling out. While the stairs have rails and the like, if you aren't at least somewhat comfortable with exposure, you may have difficulty descending these. 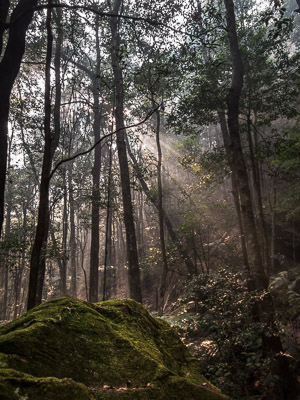 Sunbeams and forest along Wentworth Pass

From the bottom of the stairs, it is a short walk to the lower cascades of Wentworth Falls. The pool is large, and in summer it is not a bad spot for a swim.

From the lower cascades, take the track heading down the hill on the west side of the creek, and turn right on the Wentworth Pass. This is mostly fairly easy and flat walking through pleasant open forest below the cliffline. There are a couple of creek crossings where the track may briefly be lost. After about 30 minutes, you will start to hear the distant roar of the Valley of the Waters. As the creek comes into sight, you drop down and cross over the creek on a couple of bridges. Climb up the short hill to the Vera Falls Track, and turn left down the hill.

After 10 minutes, you reach the junction with Lindeman Pass, and a sign noting that the track is unmarked. Turn right on to Lindeman Pass, and head up the hill on a couple of switchbacks. The Lindeman Pass track winds around under the cliff line through temperate rainforest, generally heading south west. There will be some muddy sections where small watercourses or swamps cross the track, even in relatively dry conditions. After crossing a larger creek on slippery rocks, the track heads south and starts to emerge into more open forest near the tip of Inspiration Point. A little before rounding the point you reach the intersection with the Roberts Pass Track, which you turn right on to. 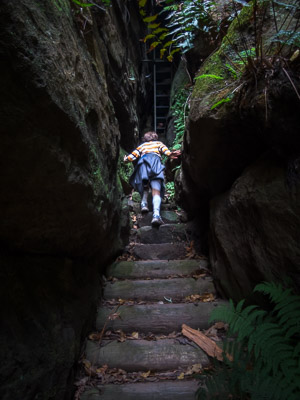 Roberts Pass climbs steadily up the eastern side of the ridge. At one point it squeezes into a narrow slot, before turning back on itself to climb up a steep set of stairs. As you reach the top of the ridge, turn right to head out to Moya Point Lookout for good views. Returning to the main track that heads north along Inspiration Point, there is another optional detour to the left out to Gladstone Lookout. Otherwise, after 10 minutes, you hit a T-intersection with the main cliff top track from Katoomba to Wentworth Falls, and turn right.

This crosses a section of hanging swamp on a boardwalk, before heading north and descending into Lilians Glen, and crossing the Valley of the Waters Creek on the spectacular Lilians Bridge. Turn right, and follow signs to the Conservation Hut.

One of the best and most popular walks in the Blue Mountains, with a great variety of scenery and spectacular views