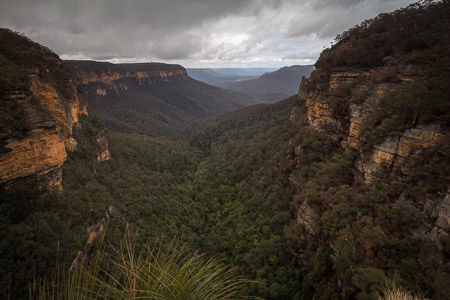 Looking down Valley of the Waters

The National Pass is one of the classic walks of the Blue Mountains, first opened in 1908. It connects the Valley of the Waters to Wentworth Falls, along a ledge half way up the cliffline overlooking the Jamison Valley and Mt Solitary. Magnificent waterfalls, towering cliffs, and sweeping valley views are just some of the highlights of the walk.

The walk is good at any time of the year, as much of it is on shaded ledges and under canopy. While the tracks can be muddy on wet days, it is well worth visiting after recent rain as the waterfalls will be in good flow.

The walk as described starts from the Conservation Hut, and follows an anti-clockwise loop. However, it can be started from a number of other places and be walked in either direction. The advantage of the anti-clockwise loop is that the stairs carved into the cliff at the eastern end are extremely steep, and it is easier to climb them than descend them. By starting the loop at the Conservation Hut, there are a variety of options to return to the car at the end of the walk, in case you are feeling tired. 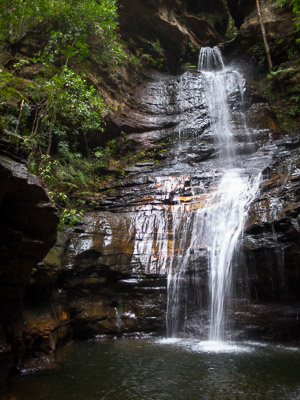 Empress Falls, one of the most impressive in the Valley of the Waters

It is possible to walk to the Conservation Hut. from Wentworth Falls Station, but it adds about 5km (2.5km each way).

It is also possible to follow the Charles Darwin Walk which starts from Wilson Park on Falls Rd. This easy track follows the beautiful Jamison Creek to the top of Wentworth Falls. The loop below can then be joined. This adds around 6km (3km each way).

Follow signs to the walking tracks from the left of the Conservation Hut, and pass a turnoff to the Short Cut Track. The track descends a lot of steps. Further down, pass a turnoff to the Overcliff Track which you can come back on at the end of the day. A short side trip to Queen Victoria Lookout is worthwhile for sweeping valley views. A little further on, another lookout, Empress Lookout, gives glimpses of Empress Falls and the canyon from above. From Empress Lookout the track descends even more steeply down several sets of metal stairs and you can get more glimpses of Empress Falls from where the track cuts under the cliff.

At the next junction take left hand branch to Empress Falls and National Pass rather than Nature Track and Lilians Bridge. More steps lead you to Empress Falls, the first of the many beautiful waterfalls that make up the Valley of the Waters. If you're lucky, you can watch canyoners abseiling down the falls, which is the exit to the canyon above. 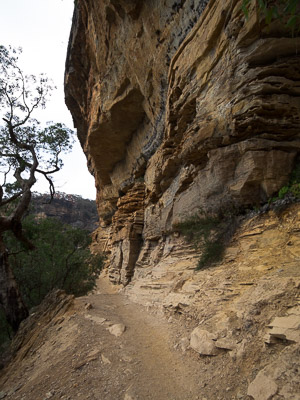 Cliff lines on the National Pass

The track then crosses the creek below Empress Falls, and descends beside the beautiful Sylvia Falls before crossing back below Edith Falls, and above Lodore Falls. This section of creek can be impassable after heavy rain, another reason for doing the loop in an anti-clockwise direction.

About 50m past this is the junction between National Pass and Wentworth Pass. Follow the left branch, which climbs shortly and sharply on to the halfway ledge of claystone between the two massive cliffs of sandstone that is a feature of so many Blue Mountains passes. For the next couple of kilometres or so, navigation is very easy, following the National Pass along the halfway ledge. There are plenty of spots with tremendous sweeping views of the Jamison Valley and giant cliffs towering above you. The best lookout is just as you round the point and first come into sight of Wentworth Falls, though of course it is unmarked and unfenced.

Just past this you pass under Den Fenella Falls, where depending on the amount of rain there has been you may get a bit wet as the track cuts behind the waterfall. Not far past here is the halfway marker, followed by another waterfall in an impressive cirque, before reaching the junction with Wentworth Pass and Slacks Stairs. There is the option of doing a side trip to the bottom of Wentworth Falls from here. Even if you're not going down Wentworth Pass it's still worth wandering down the stairs about 50m as you get one of the best views of both sections of Wentworth Falls. 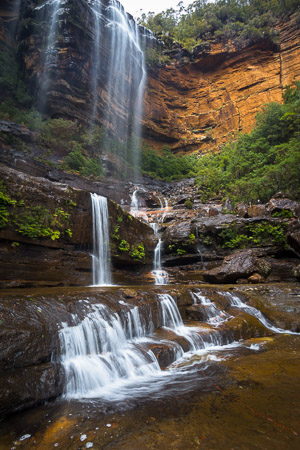 Continuing on the main track, there is a narrow section where you have to duck your head, and then the track descends to the middle ledge of the spectacular Wentworth Falls. You will probably see plenty of Sulphur-Crested Cockatoos that circle around near the falls and perch in the nearby trees. After crossing the bottom of the waterfall, possibly the most impressive part of the track follows. The Grand Stairway snakes very steeply up a series of stairs and ledges where a number of sections of the track are cut directly out of the cliff face itself.

At the next junction, you have the option of turning right and doing the Rocket Point Circuit. Even if you don't decide to take the loop track, the short out and back to Rocket Point itself is well worth the detour as it has great views looking down on Wentworth Falls as well as the National Pass Track along which you have just walked.

After the Rocket Point side trip, cross the main creek below the pretty Queens Cascades, continue straight ahead to a turnoff on the left to Fletchers Lookout, which has good views of the top of the falls. From the same intersection you can also do the Weeping Rock Circuit, which only takes about 5 minutes. Continue on the Undercliff Track, which as its name suggests, is cut into the top layer of cliffs in places. After rain, there are many hanging swamps above, and the rock is always dripping. 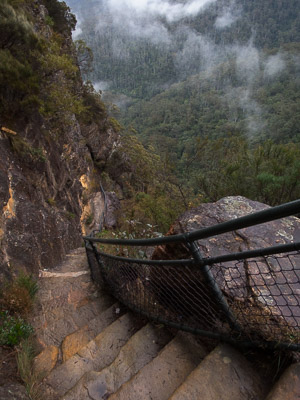 Looking down the Grand Stairway

Back at the Undercliff Track, follow it around into Den Fenella, a mini canyon. It is a short side trip through Den Fenella and out to another great lookout at the end of a narrow ledge.

Continuing along the Undercliff Track, you shortly reach Breakfast Point Lookout, and the junction with the Overcliff Track. Ignoring another track that leads up the hill, follow the Overcliff Track around the cliff edges to Lyrebird Lookout, which has good views down into the waterfalls of the Valley of the Waters.

From Lyrebird Lookout either head directly up the hill to the Shortcut Track and turn left and then right to get back to the Conservation Hut, or otherwise continue along for about 50m to a track junction and take either the left or the right branch both of which lead you back to the main track that comes down from the Conservation Hut. Turn right to get back. The lower of the two tracks is probably in the better condition.

The walk can be shortened in time by leaving out side trips to lookouts, and by returning via the Wentworth Falls car park and Short Cut Track to the Conservation Hut. 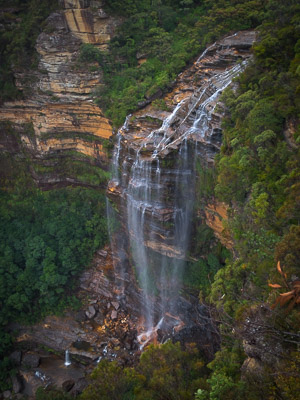 360 degree views from the top of the Ruined Castle, one of the best easy day walks in the Blue Mountains.