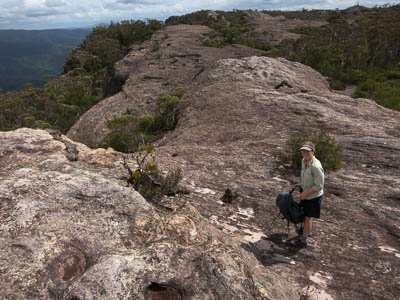 The route crosses many of these domes

Bonnum Pic lies near the end of a spectacular knife-edge ridge that juts out into the Wollondilly Valley in Nattai NP. The walk to the Pic has a bit of everything - valley views, on-track walking, off-track walking, rock scrambling and route finding. It is best in the cooler months as it is along the ridges, and there is accessible water only if there has been recent rain.

While reaching the Pic involves rock scrambling and route finding, because this is an out and back walk, parties can go as far as they are comfortable before turning back. Pay attention to your route out as some of the tracks are vague. There are great views from many places once the cliffs are reached.

If you are coming from Sydney, take the turnoff off the Hume HIghway to Mittagong, and turn right at the Y-intersection in the middle of town on to the Old Hume Highway. About a kilometre after crossing over the main highway, turn right on to Wombeyan Caves Rd, and reset your speedo.

Alternatively, if you are coming from the south, take the Old Hume Highway exit near Mittagong, turn left, and then right after a kilometre on to Wombeyan Caves Rd.

From the Wombeyan Caves Rd turn-off, drive for 17.0km and turn right on to Wanganderry Rd. This is gravel and dirt, though it should be trafficable to 2wd cars most of the time. It is 5.3km from the turn-off to the stock yards and gate. Park here in the turning circle.

Go through the gate, making sure you leave it as you found it. 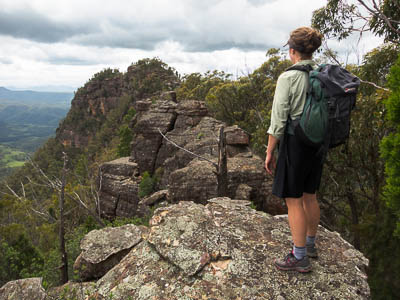 Looking out to the Pic

The preferred option, as it avoids private property, is to walk down the road for 500m to the Nattai National Park sign. Just down the hill from this is the start of a signposted track to Bonnum Pic. This crosses a deep creek, and then a shallower one, before climbing up to the fence line. The track has a number of wooden signs and the odd cairn, but in places is tricky to follow. Pay attention and be prepared to do some backtracking.

Alternatively, turn right after passing through the gate and follow the fence line around the outside of the private property. This route dips up and down as it crosses the tops of a couple of small creeks, before rejoining the route above.

Either way, from this point, follow the fenceline roughly north, past a dam inside the fence, to a large treed clearing. Continue directly north across the clearing to a couple of taped trees and thence to the edge of the bush. Pick up the fire trail that heads into the bush to the north, along the ridge. After 700m or so, at MGA485020, the fire trail swings west, and a well-marked foot track branches off, initially to the north west. The track is reasonably clear, though there is the odd cairn. 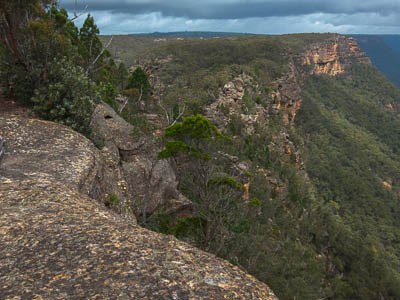 The track follows the obvious ridge line out to the western cliff edge at MGA477032, above the west side of Bonnum Pic creek. The forest opens out into heath, and great views of the Burnt Creek Valley. From here the track becomes less distinct, though it continues to be marked with the odd bit of tape and numerous cairns. There are competing tracks in some areas! The terrain is now a mixture of open forest, and spectacular dome-shaped rock formations which offer great walking and scenery. In general, the best route keeps to the open rocky domes less than 100m from the cliff edge.

The cliffline swings from north-west to north-east and from here to the Pic, the route generally stays close to the cliff edge. There are occasional cairns and tape markings, though not enough to rely on for navigation.

There is a scramble down beside the small creek at the narrowest point on the ridge on the map. This creek in fact tumbles into the valley on the western side, not the eastern as marked on the map, though mostly it will not be flowing. There is also a bit of a scramble up the other side. From there it is pretty much a case of follow your nose. The route keeps to the skyline except for one part where it drops below the top cliffs on the eastern side.

The Pic is the second last bump on the ridge, and offers great views of the Wollondilly Valley, Lake Burragorang, the Wanganderry Walls and even Mt Colong. The final bump requires an exposed scramble down a very narrow section of the ridge to reach - the "slide of death". A 15m rope or climbing tape is advised if you intend to descend this as it is tricky to ascend on the way back. There is a log book on the lower platform at the very end.

After a break, return the way you came.

Easy walk down to beautiful grassy campsites on the Nattai River

A relatively easy walk to a spectacular lookout

Trip report with maps and pictures