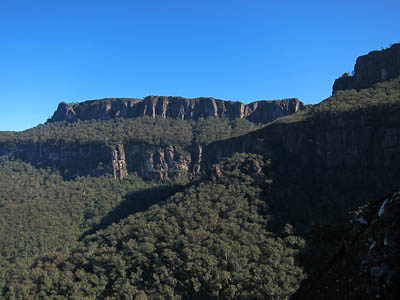 The Castle is a spectacular and challenging day walk to one of the iconic peaks of Morton National Park. While the total distance is not large, the climb of nearly 800m is capped by a series of exposed scrambles near the summit. Good fitness, coupled with a head for heights is required. The walk is not recommended when wet as the scrambles would be quite difficult and dangerous.

The views from the summit are tremendous and much time can be spent on the cliff edges enjoying the sights in all directions. Most parties should carry a 20m rope or tape in case fixed ropes are not present. Tracks in general are not signposted, and in places there is a confusion of tracks. Parties need to be confident with route finding.

The walk is best from late autumn to early spring, as the cool weather allows for a more pleasant climbing temperature.

The walk to the Castle begins at Long Gully, a picnic and camping area on the banks of the Yadboro River. It is approached by a drive of about an hour from Milton on the South Coast. The roads are mostly unsealed forestry roads. These are in reasonable condition, and are negotiable by normal clearance 2WD cars in dry weather. They become quite slippery and muddy after rain, and an AWD or 4WD vehicle is recommended.

After passing south through the main shops on the Princes Highway at Milton, turn right into Croobyar Rd at the traffic lights, and reset your trip meter. Continue on as Croobyar Rd becomes Woodstock Rd and then Woodburn Rd. At the 16.0km mark, turn right (signposted to Pigeon House Mountain and Yadboro) on to Clyde Ridge Rd. From here to Long Gully, the remainder of the roads are unsealed. At 23.9km, turn right (again signposted to Pigeon House Mountain and Yadboro) on to Yadboro Forest Road. At 28.4km, pass the turnoff to Pigeon House Mountain on your right, and at 35.5km pass another turn off to Blue Gum Flat Camping Area on your left. The road heads down to a bridge crossing of the Clyde River at 38.0km, and the Yadboro Campground is found just on the other side of the bridge. Continue along the road to the 41.4km mark where there is a turnoff on the right on to Long Gully Road, and an old sign pointing to the Castle. Follow this road down to Long Gully at 42.9km, and turn right into the campground road. The camping area is 100m along on the right, and the parking area is a further 100m past that. 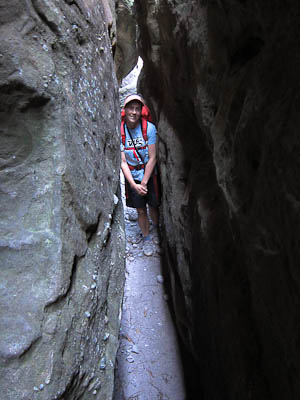 In the Tunnel through the tadpole tail

Follow the track that leaves from the far end of the car park, following the Yadboro River for 250m to a shallow pool. Cross the river carefully - depending on the depth you may be able to keep your feet dry by hopping across on boulders, but more likely you will need to remove shoes. From here, follow the trail as it criss crosses the side creek, Castle Creek, before climbing out on an old forestry road up Kalianna Ridge. The climb up the ridge is fairly gentle, with one short downhill to a saddle punctuating a steady uphill. As you approach the lower ramparts of the Castle, the track steepens and heads around to the right. The NPWS has done quite a lot of work in this section, building steps and stabilising slopes. There is a steep but easy climb up to the cliffline, including one section with chain guide rails up a conglomerate slope.

For those who have walked the route before and remember a scramble up this lower cliffline, the constructed section bypasses this old route completely, as it was becoming very eroded. The new route does however miss out on the excellent views that could be had from the top of the scramble.

Once at the cliffline, turn left. The next section follows this western cliffline, the undulating track ducking under trees and climbing over boulders. The track is quite eroded in places, and the going is fairly slow. The mallee grows out from the slopes at quite an angle, requiring ducking under trees and clambering over exposed roots. Generally the track stays fairly close to the cliffline. Keep an eye out for arrows scratched in the rock as these point out the route in case of a decision needing to be made. 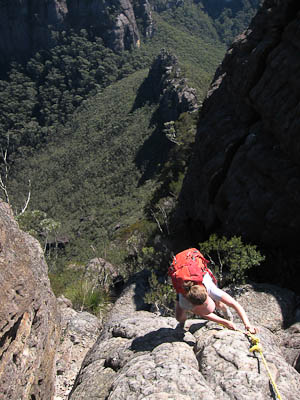 One section of the steep exposed climb to the summit

Rounding the bottom corner of the end of the cliffline, the track heads steeply up. The NPWS has again constructed steps from logs and boards, and these should be used as much as possible to prevent further erosion. Several small clifflines need to be passed on the right or left, and the correct direction is generally indicated by an arrow scratched in the rock. There are a couple of places where a short detour from the track can be taken to a lookout across the valley to the imposing upper and lower walls of Mt Owen and Mt Nibelung.

Not far below the upper cliffs, the track forks. A sign scratched into the rock points right to TC (The Castle) and left to MV (Monolith Valley). Take the right branch, which leads up to the Tunnel, a dark narrow pass through the tail of the Castle to the eastern side. There is a bit of a scramble on both sides of the Tunnel, and packs may need to be passed on the east side. Drop down a few metres to the track, and turn right. A couple of hundred metres along, the track heads up a minor gully to a rock scramble, from where the ascent of the Castle proper begins.

The first 20m or so is easy going, before an arrow in the rock pointing left to a tricky move. A couple of large boulders need to be climbed over or around, on good hand and footholds, but with some exposure. The rest of the climb up to the "tadpole tail" (the Castle as a whole looks like a tadpole from above) is more straightforward. There is more scrambling, but the climb is not exposed, traversing back and forth up ledges and gullies. From the top, there are excellent views down the tail and towards Mt Owen and Mt Nibelung. 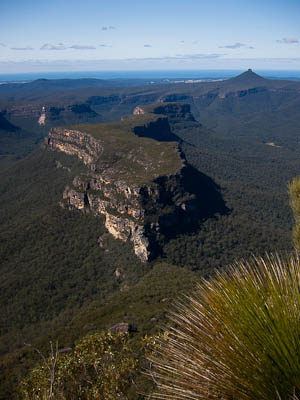 From here to the summit the going is trickier. The "track" mostly involves rock scrambling and boulder hopping, and good route finding is key. Packs may need to be passed in some places. After this boulder scrambling, the track passes around the left side of a massive detached block, before reaching the final section of climbing, next to another massive block. There are three short pitches that need to be negotiated. The first two pitches are likely to have fixed ropes in place. If not, a good scrambler may need to climb up with a rope, and let it down for the rest of the party. . The first pitch is up a groove, either straight ahead (harder but less exposed) or out to the right (easier but more exposed). At the top of this the next pitch consists of a bulging nose in between two slots. The bottom section of the nose is slightly overhung and difficult without a rope or other assistance. A fall here would be very dangerous, as it is fairly exposed. This leads into a slot a couple of metres deep, which needs bridging to get up, though there are good footholds. One more short scramble of 5m or so leads to the flat summit plateau.

Pay careful attention to the route you have taken as you will need to reverse it on your way down.

The top of the Castle is covered with rocky platforms, separated by low scrubby heath. There are no formed tracks, though some routes are more trodden than others and easier to make your way through the scrub. There is a swampy area in the centre of the plateau that is quite boggy and wet, though it can be avoided on the far western side. The rocky platforms are covered with shallow pools that are often filled with water, particularly after rain. Make your way out to the southern cliffline, where there excellent views of Byangee Walls and Pigeon House Mountain. There is a log book in a tall metal container.

After enjoying the views make your way carefully back down to the Tunnel entrance. Instead of returning through the Tunnel, continue north along the track to the saddle at Castle Gap, and take the track to the west. This leads back to the three way junction with the signs to TC and MV. Return from here to Long Gully.

This walk can also be done as an overnight walk by camping at Cooyoyo Creek, about 10 minutes walk from Castle Gap. 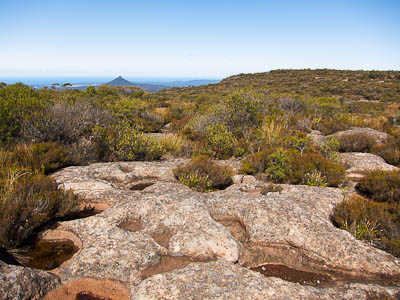 The rocky and scrubby summit plateau

A steep but rewarding climb to this signature peak

Pigeon House and Beyond (Edition 2), The Budawang Committee

An outstanding guide to the Budawang Range, including Budawang NP and southern Morton NP

Track notes for the Castle