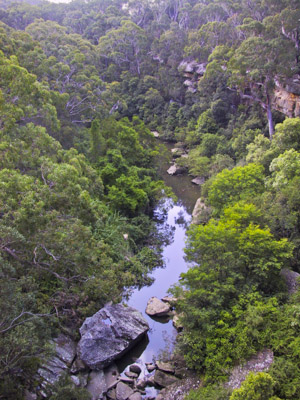 Lane Cove National Park protects a narrow strip of land in the Lane Cove River Valley on Sydney's lower north shore. Much of the land near the banks of the river has been transformed by the planting of exotic trees, due to the park's beginning as first an orchard, and then as "Fairyland Pleasure Grounds". However, away from the banks the original environment still remains. It is constantly under pressure due to the small size of the park and the developed areas around that back on to and drain into the park.

The upper section of the park can be reached by walking tracks and cycle tracks that lead in off various back streets from the suburbs of Pymble, Turramurra, Wahroonga, Thornleigh, Pennant Hills, Beecroft and Macquarie Park.

Lane Cove National Park has a large number of walking tracks although due to its small size most of them are relatively short. The main track is the section of the Great North Walk that runs from the Fullers Rd bridge all the way to the top of the park up near Pennant Hills. Other short walks exist in the lower section of the park.

The only waterway of size is the Lane Cove River. However this can be paddled quite easily by smaller craft upstream of the weir near Fullers Bridge, and downstream by any craft. Upstream is pleasant paddling, although there are numerous exotic weeds on the banks which detract from the experience.

There are a limited number of trails in the upper Lane Cover River Valley that can be ridden, although a number of them have been replaced by cycleways. Lower down there is not really any mountain biking, but the ride through the park from Lane Cove Rd to Lady Game Drive on the sealed road is enjoyable and relatively free from traffic except around the middle of the day on weekends. It is only about 5km one way.