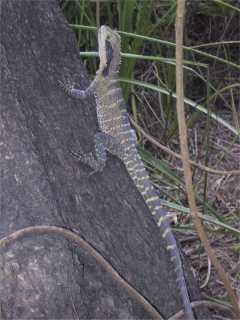 Lane Cove National Park is a relatively small, narrow park restricted mostly to the banks of the Lane Cove River. There is a limited ability to do loop walks in the park - most of the tracks run end to end along the river. However, this walk in the lower section of the park heads upstream along one bank and back down the other, passing through a surprising variety of landscapes along the way. It is a good walk if you are interested in spotting birds and animals, or looking at different plants.

Park at one of the lower entrances to the park. These are close together, either off Delhi Rd near the Lane Cove River bridge, or off Lady Game Drive, near the Fullers Rd intersection in Chatswood West. Note that parking fees apply.

Alternatively, catch a 545 or 256 bus down Fullers Rd from Chatswood Station.

You can also walk the 1.5km from the station down Fullers Rd, or 3.5km via the Rail to River Track.

Make your way to the south side of the weir. This will require a crossing if you're coming from the Lady Game Drive entrance. At the weir you can generally see a large variety of water birds. The most common include the Black Duck, the Wood Duck, the Dusky Moorhen and the occasional White Faced Heron. 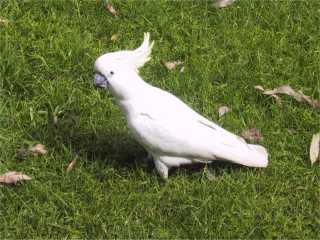 From the weir, pick up the boardwalk on the western side of the river, and head along to the grassy flats. Continue along the bank passing the boatshed, along a disused road, across a bridge and on to the track. The track keeps to the river bank for several kilometres, crossing numerous picnic areas. It is relatively obvious to follow as long as you stay close to the bank.

Hundreds of Eastern Water Dragons and Eastern Water Skinks sun themselves on the track all the way along the river, and you will almost certainly hear many and see a few as they skitter at your approach. Other animals you are likely to see in this section include Sulphur-Crested Cockatoos, which regularly squawk from the trees overhanging the clearings, Crimson Rosellas and Kookaburras.

Follow the track until you reach Porters Creek Bridge. Turn right and cross the bridge, and then turn right again to rejoin the track.

Not far past here the track leaves the river and climbs a little on to the slopes. The vegetation changes significantly with many banksias, grevilleas and acacias. After traversing across the slope, the track drops down then up a rocky track to a set of stairs leading up to the road. 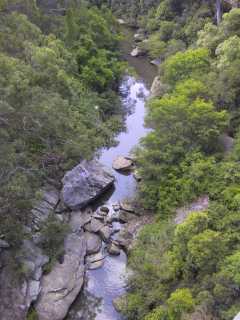 Turn right on to a path, following signs to the Great North Walk. This passes under the bridge at Lane Cove Rd (De Burghs Bridge), up a hill and around to the left, eventually coming out on Lane Cove Rd. Turn left and cross De Burghs Bridge, and walk up the hill to the first set of traffic lights. Turn left here into a clearing with signs to the Great North Walk. Follow the fire trail down the hill to a T-junction with the main Great North Walk track and turn left. Just after the track passes under the bridge, a short side track to the right leads down to the Blue Hole, a large pool with a rocky slab at the edge to sit on.

Continuing along the main track, it passes alongside interesting rock faces, through a cave, and along open rocky slabs well above the river. One overhang over the path is particularly spectacular.

After passing a turn off to Fiddens Wharf Oval, there is a short faint detour to a lookout over the site of the old Fiddens Wharf, currently covered by weeds. Along the next section of track the walk passes through a number of different plant communities and these are noted with interpretive signs. Along a flat section, the track forks at an intersection. Take the track to the left, marked Great North Walk. This climbs up and over the top of a spur, and down to a road. Turn left on the road and about 50m along the road the track starts again on your right. Head up to the houses, turn right on to a fire trail, and down the hill. This soon rejoins the main road on this side of the river, which you can follow back to where you started.