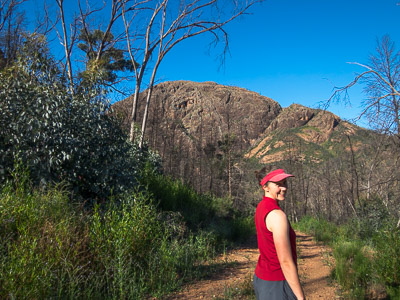 Belougery Split Rock is a steep peak in the Warrumbungles not far from the main campground. Despite being only a short walk, Belougery Split Rock has its challenges, not the least being the 300m+ climb and some easy scrambling to get to the summit. However, the summit views are excellent.

The route described below adds in a walk up the shady Burbie Canyon, though this could be omitted if desired.

The walk begins at the Split Rock Car Park. This is 2.3km along Timor Road past the turnoff to Camp Blackman and the visitor centre. 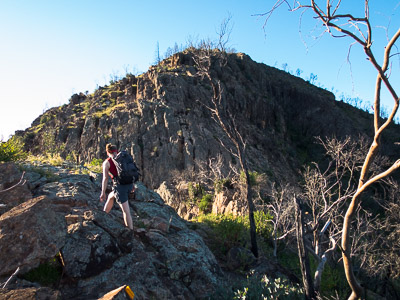 The steep climb up to the summit of the Split Rock

Leave your car at the Split Rock Car Park, or at Camp Wambelong.

Walk west along the road for 700m. Just past a parking area, look for a set of steps on the left hand side of the road, which lead up to the Burbie Canyon track. This leads into a pleasant shady creek with steep sides. Follow this upstream for 1km to a junction with an old fire trail. Turn left and follow the fire trail up to the saddle at Burbie Gap. 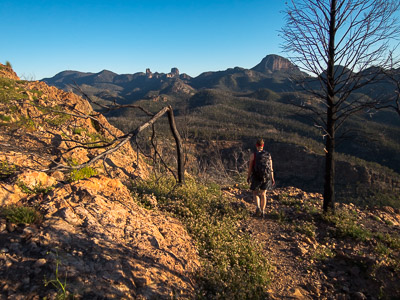 Leaving the summit, great views of the High Tops

From Burbie Gap, follow the trail down Belougery Gully for 600m to a turnoff. Head right, following a track steeply up the gully between Belougery Split Rock and Blackmans Mountain. From the saddle between the peaks, the track continues to climb steeply up the south face of the peak, eventually reaching a junction with a set of steps and a gate. This marks the start of the track to the summit. 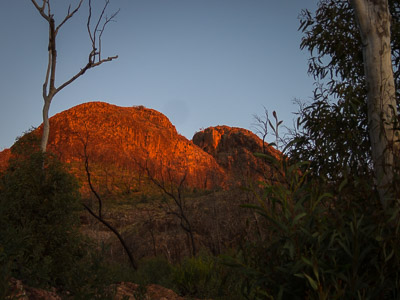 The track to the summit of Belougery Split Rock is not long, but does involve some easy scrambling, and so is not recommended in the wet. There are excellent 360 degree views from the summit, including most of the peaks of the Warrumbungles.

After a break on the peak, return to the gate at the junction.

From the junction, follow the track down, and then around the eastern face of the mountain. After passing through a small saddle, there is the final steep 200m descent to the Split Rock Car Park, from where you can clearly see the split.

A challenging day walk with spectacular views of most of the Warrumbungles landmarks.

While its appearance is not as dramatic as that of some of the other Warrumbungles peaks, the views from the summit of Mt Exmouth are superb, looking out over the rest of the park.