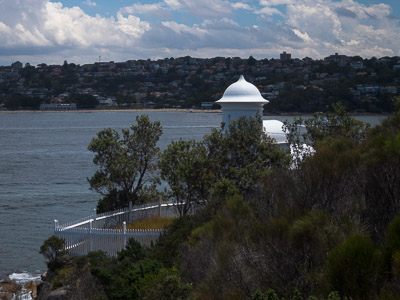 Sydney is blessed with a beautiful harbour, the foreshores of which are still covered with bush in many places. The walk from the Spit to Manly via the Manly Scenic Walkway passes by numerous delightful beaches, and through stunning coastal bushland, all less than 10km from the centre of the city. It can be done all year round - summer and early autumn allow for swimming at the harbour beaches, spring and early summer are great for wildflowers. The walk is mostly well signposted, and there are maps at a number of places along the way. At the end of the walk, there are plenty of cafes and ice cream parlours in the Corso at Manly. The walk can also be reversed, finishing at the Spit, though the cafe options at the end of the walk are then non-existent!

The walk starts on the north side of the Spit Bridge, in Seaforth.

One option is to leave a car on Battle Boulevard, off Spit Road, just on the Manly side of the Spit Bridge. At the end of the walk you can catch a bus back to the car.

However, the walk is well served at both ends by public transport. There are too many bus options to list - use a transport planner to find the best option for you. The best spots to catch a bus to are either Battle Boulevard (near Manly/Spit Roads), on the Manly side of Spit Bridge, or to Spit Rd near Pawirri Rd, on the Mosman side of Spit Bridge. If the latter, walk across Spit Bridge on the footpath and turn left at the end of the railing and down to the stairs under the bridge. 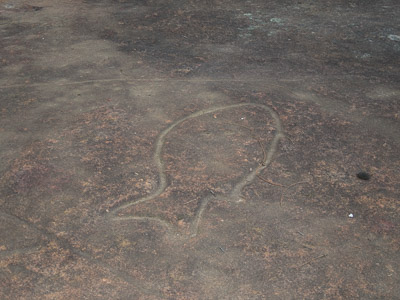 On the way back, you can catch any number of buses that leave Manly, or if you are heading in to the city, catching a ferry from the Manly Wharf is a great way to see much of the route that you have walked.

Start the walk by heading down the road towards the bridge, and pick up the stairs heading down under the bridge. These lead through to Ellery's Punt Reserve, where the punt used to run prior to the original Spit Bridge being opened. For the next kilometre, the track follows the foreshore on a mix of gravel path, boardwalk and pavement. After ducking in to Fisher Bay, it emerges from the harbour bush at the busy beach of Sandy Bay, a popular dog beach on weekends.

Another 5 minutes' walk brings you to Clontarf Beach and Reserve, which will be packed on weekends in the warmer months. Unlike most of the harbour beaches which are nestled in bays, Clontarf stretches for almost a kilometre around the point of the reserve. If the tide is low, you can walk all the way along the beach. At high tide, once around the point you may need to cross the grassy reserve and walk along to the end of Monash Cres, where a lane leads you back to the beachfront. Either way, a set of steps continues the walk. 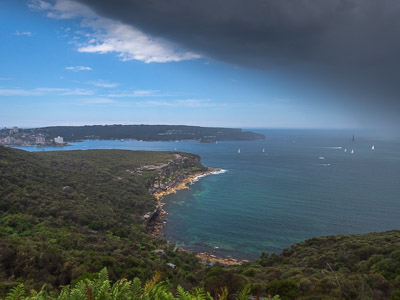 The next section is a bit rougher than the rest of the walk, more natural bush track, and less constructed sections. There is a fair bit of up and down as the track goes from the foreshore to the clifftops. A number of small beaches are passed, on beautiful clear blue water. The last of these is Castle Rock Beach, which is reached at the boundary to the Sydney Harbour National Park.

Entering the National Park, the track has undergone extensive maintenance, with most steeper sections fitted out with sandstone block steps. It climbs up on to the Grotto Point headland, through a gorgeous forest of Sydney Red Gum (Angophora costata), up to a casuarina grove. From here, an unmarked rough track to the right leads out through the heath to Grotto Point and the lighthouse, a worthwhile side trip.

A short way further along the track are the Grotto Point aboriginal engravings, fading remnants of the area's previous inhabitants. There are a number of fish carved into the rock platform here, as well as boomerangs and a kangaroo. Look and enjoy, but please don't touch. 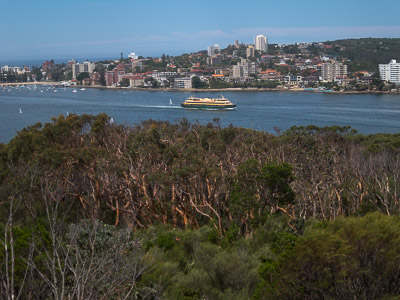 The track continues to climb up on to the plateau, with a couple of lookouts that have great views over Crater Cove, and the old huts of Crater Valley. A track junction is reached shortly, with a 200m detour to Arabanoo Lookout which looks out over Manly and North Head. Returning to the main track, there is a long slow descent to Reef Beach, a secluded little hideaway within the National Park. It used to be a popular naturist beach before nude bathing was banned there in the 1990s.

On the far side of the reserve, the track briefly leaves the water again. Climb the stairs, follow the road (King Ave) around to the right, then left and right on to the shared pedestrian/bike path on Lauderdale Ave. After 50m, veer right on to the paved path that leads down through the foreshore reserve. The last couple of kilometres into Manly are easy and flat on the path, which hugs the shoreline the whole way.

An excellent resource for walkers, with a variety of walks within easy reach of Sydney