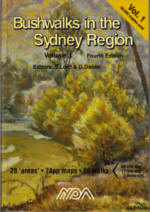 Bushwalks in the Sydney Region, Volume 1 is a very useful introduction for novice walkers. Together with its companion volume, it covers a wide range of areas within easy reach of Sydney.

It starts with a summary of all eighty-six walks, which is a benefit for planning. You can scan through and quickly find walks which meet your time, distance or difficulty criteria.

There is a very brief introduction, which is also good as this information tends to be duplicated in every book of track notes that you buy. In this case, the book states that "first aid, safety, food, hygiene, equipment and navigation have not been covered in this book, as there are several books devoted to these subjects". It also gives some references.

The walk information follows, and includes an introduction, description, summary info and a map. The descriptions are of reasonable quality and fairly detailed. They are written by a number of different people, so styles vary, but they in general tend to be fairly matter of fact. Occasionally they point out alternative routes and points of interest, but could do so more often. The summary information follows, although I would prefer to see it at the start rather than the end. Public transport options are noted, which is good

The maps are two-colour (blue and black), are of high quality and are almost all at the same scale (1:25000) as the standard NSW topographic maps. In the case of the majority of walks in the book, these maps will suffice. Only for the remoter walks are likely to require separate topographic maps.

Of the eighty-six walks, there are sixty-six one-day walks, seventeen two-day walks and three three-day walks - an excellent variety of lengths for such a book. The majority of the walks are rated medium or easier which tends to make this book of more interest to the novice walker.

Geographically the book has a wide spread of walks, with most of the major national parks near Sydney being well represented. Obviously there is somewhat of a bias to the Blue Mountains due to its size and number of tracks, but this is to be expected. The parks that were overlooked were Yengo National Park with no walks despite its size, and to a smaller extent Dharug, which has only one walk.

Overall, the variety of walks and the quality of the maps make this a worthwhile purchase for inexperienced walkers, and it is also a useful resource for more experienced walkers looking for introductory walks in areas they may not have visited much before.