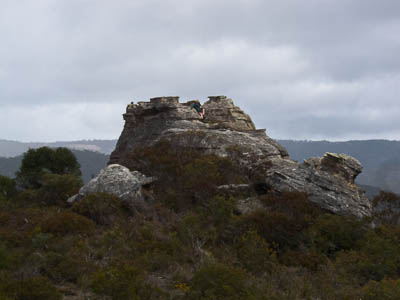 The prominent pagode known as the Centre of the Universe

Wollangambe Crater is an interesting formation in the Wollangambe Wilderness. While there are many volcanic necks in the Blue Mountains, this "crater" appears to be a large bowl formed simply by the erosion of several small creeks.

The walk traverses the rugged Wollangambe Wilderness to a remote section of the wild Wollangambe River, passing many pagoda rock formations.

Heading west along Bells Line of Road, turn off onto Sandham Rd just before the main road crosses the railway line at Bell. Drive up Sandham Rd for about 1.5km to a driveway on the right. There is a sign on a tree saying "Wollangambe River 5km", and the road changes from sealed to unsealed at this point. On the right is National Parks sign saying "Bell Perimeter Trail". Park here on the side of the road.

Alternatively, catch a train to Bell Station and walk up Sandham Rd for about 400m to where the fire trail branches off.

This walk traverses part of the Wollangambe Wilderness, so track notes are less detailed than usual. Parties should be proficient in their navigation as tracks are vague. This is a wilderness area, so there are no cairns or markers. 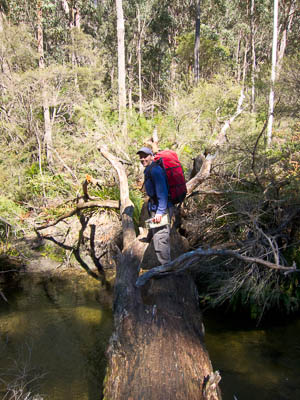 Crossing the Wollangambe River on a convenient tree

From Sandham Road, head down the rock lined path on to the driveway through private property. After heading north for 100m, turn right at a Y intersection. A painted sign on a tree says "Walking Trail". Another 100m or so brings you to a wide clearing with power lines running overhead. Head left for 100m under the power lines and then veer right into the bush on a fire trail at a locked gate. There is a National Parks sign saying "Blue Mountains National Park - Walkers Only". Continue following the fire trail, which winds down and around a bit, for about 400m to a junction. Take the left trail, which is strewn with logs. This trail heads roughly north, winding down the ridge, and for much of its length it is no longer obvious that it was once a fire trail. After about 2km you cross a creek at a ford. Climb the steep hill up the other side and follow the track towards a large pagoda (spot height 994, known sometimes as "the Centre of the Universe"). From the pagoda, pick up a track that heads north east, before it swings south east, drops left across the saddle, and then continues south east following the rising ridge.

As you approach the 978 point, you will need to drop off the ridge on the left hand side, and head towards the saddle. The main ridge turns into a finger of cliff sticking out with a 30m cliff that is not marked on the map. If you find yourself on it, it does provide good views! Once in the saddle, climb the rock face on the other side. 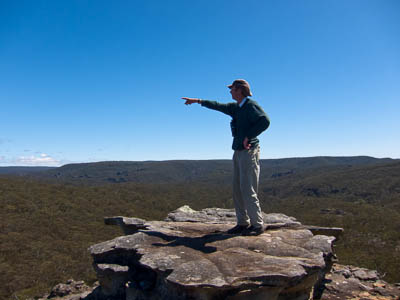 Views of the Wollangambe Wilderness

From here to the Wollangambe the route is vague, although it follows the ridge that heads generally east. While there is a track, there are numerous pagodas and rocky outcrops to cross, and the track disappears across these. Careful navigation and route finding is needed from here to reach the final hill above the Wollangambe. There is a steepish descent from the hill to the Wollangambe. Some good campsites exist on this side of the river, but to visit Wollangambe Crater, cross over the river and head east for about 200m, keeping to the south side of the creek that emerges from the Crater.

There are a number of small campsites in the vicinity of the crater.

The following day, return the same way that you came.

16-17/10/2010 - Bell to Wollangambe Crater: Walked from Bell out to near the crater in a bizarre mix of snow, hail, and sunshine. Lunch under a convenient overhang out of the hail. The next morning we walked around to the crater and then followed the ridges back to Bell [SBW][L] (photos)

09-10/05/2003 - Bell to Wollangambe Crater: Exploratory walk taking in most of the tracks in the area south and west of the Crater (report | photos)