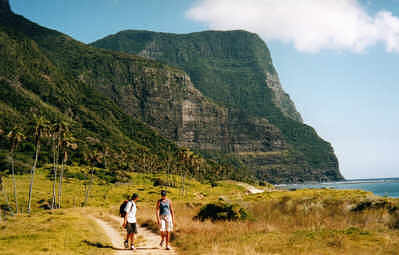 Mt Gower, with the 'Lower Road' cliffline in front

To hardened bushwalkers the thought of requiring a guide for a day hike may seem like anathema. However, the ascent to the highest point on Lord Howe Island, Mt Gower, is not one to be missed, and the licensed guide is a source of all sorts of information on flora, fauna and history of the peak. Make sure you book early as there are a limited number of trips per week and a limited number of places each trip. As you are walking as part of a larger group, if you are a reasonably strong walker you will probably find the pace pretty easy - hence the time and the grade rating I've given.

The walk usually starts at the end of the tar section at the far south end of Lagoon Rd. If you are riding, you can leave you bikes at the rack here.

The walk starts from the end of the sealed section of Lagoon Rd at the south end of the island. The dirt road continues for a couple of kilometres to Little Island, which is a relaxing stroll along flat terrain. Make the most of it - it's the easiest walking you'll get until you come back this way on the return.

Climbing one of the Kentia palms

About 500m past Little Is the climb starts. For the most part there are fixed ropes in place on all difficult climbs, although all the climbs can be made without their use. I avoided the ropes on the way up - something to do with my ego, I guess. About 100m up, the cliff line is reached. We stopped for a short break as our guides, Jack and Rex, gave us a demonstration of how to climb the Kentia palms to collect the nuts. We were all invited to try, but no-one was yet ready to embarrass themselves in front of the group.

There are actually four different species of palm on the island, and they grow at different altitudes. The traditional house plant is the thatch palm, which grows at lower altitudes, and is probably the most commonly seen.

The track travels along a ledge along the bottom of the cliff which narrows into a grassy slope called the Lower Road (rather tongue-in-cheek, I think). Despite there being ropes to steady yourself on, it is quite an unnerving experience walking along the slope with cliffs rising straight up to your left, and dropping over 100m straight down to the ocean to your right. The Road continues for nearly 500m before you round the corner into the Erskine Valley, between Mt Gower and Mt Lidgbird. 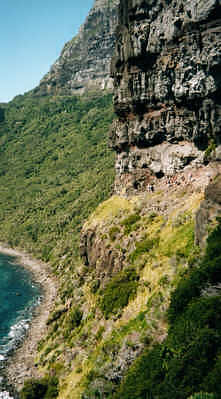 The return trip along the 'Lower Road'

From here the going is relatively flat for almost a kilometre, when you hit Erskine Creek. This is the last source of water until you pass by here on the way back, so drink up and fill your bottles. Around this area you see quite a lot of the second variety of palm, the curly palm, which has much longer dangling fronds.

The track now starts to climb steeply - about 200m up in less than a kilometre. This brings you out at the top of the valley, on the saddle between Gower and Lidgbird. At this point you are about 400m up, and the first of the spectacular views back up the island are gained. Remember that there is still another 450m to go up, and there is only about a kilometre of walking left!

As you can imagine, there is a lot of climbing in that last kilometre. Again there are ropes to aid you, although for the most part the rocks have plenty of handholds, and it is not too hard to climb without the ropes. This section is likely to take a while, particularly as most groups have people with varying levels of fitness. There are several great views on the way up, and if you are like me you'll probably end up taking the same pictures from different places just because each one is a little better than the last.

Depending on the weather you may also get views of Balls Pyramid, a 600m rocky peak jutting out of the ocean 23km off to the south east. 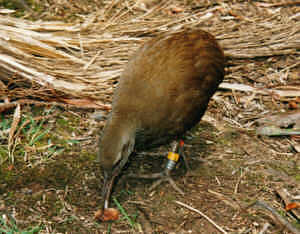 The vegetation undergoes a rapid change as you near the peak. Two new species of palm - the little mountain palm and the big mountain palm - replace the curly palm. The height of the trees decreases, and the wetness produces a low, ferny rainforest often called the "Moss Forest". The top of Mt Gower is regularly covered in cloud and there is probably a better than even chance that your views will be obscured. Luckily for us the skies were perfectly clear, and we had a classic view of the rest of the island over lunch.

Also on the top of the peak are numerous Lord Howe Island woodhen, a rare species brought back from the brink of extinction. They are quite easy to spot and will approach within a couple of metres in search of food.

The walk down takes about 3 hours but is relatively easy using the ropes. After the return crossing of the Lower Road, I had a go at climbing the Kentia palm, and got about half way up - better than the other couple of people that tried it, but still a bit of a way from being any use as a palm nut picker!

The final walk back along the dirt road through the palms to your bikes is nice and flat, and a good way to finish off. The only tough bit from here is the climb up the hill on your bike, and the usual headwind past the airport.

The Clear Place and Valley of Shadows