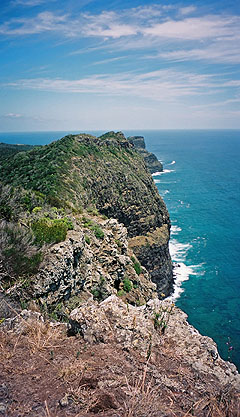 The cliffs at the north end of Lord Howe Island, between Malabar and Kims Lookout

Malabar, at the north end of Lord Howe, has the some of the best views of the south end of the island. There is a bit of a climb, but it is well worth the effort. By taking a packed lunch you can combine it with an exploration of North Bay, including Old Gulch and Mt Eliza. Alternatively, North Bay could be skipped and saved for another day.

The walk starts off just past the top of the rise on Ned's Beach Rd, opposite the cemetery. There is a sign indicating the path up to Malabar. Note that if you leave your bike here, and you decide to continue along to Kim's Lookout or North Bay, you will have an extra walk at the end to retrieve your bike.

The path initially winds through the forest for a short way, and then reaches a stile. Crossing the stile into the paddock beyond, the trail climbs steeply up the hill soon reaching another stile. There are some good views of the lagoon and Old Settlement Beach to be had from here.

Beyond this stile, the track continues to climb, although less steeply now. Not far along the trail you reach a plaque in the rock. This is a memorial to the airmen killed in 1948 when an RAAF Catalina clipped the top of the hill and crashed. Some of the remains can still be seen in the paddock below. 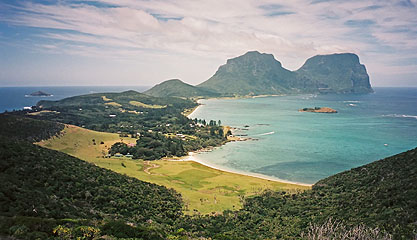 After another 500m you reach Malabar itself. The cliffs on the north side are home to numerous birds, particularly the red-tailed tropicbird, which can be seen wheeling around particularly during the summer. To the north-east are the Admiralty Islets, also home to many birds. Roach Island is the most obvious with its tunnel cut by waves from one side to the other. Off to the south is one of the classic views of the island, with Mt Lidgbird in the foreground and Mt Gower behind. To the south-east is Ned's Beach, one of the best areas for viewing fish, with Middle Beach beyond.

From here the path follows the cliffline, somewhat up and down, to Kim's Lookout. The cliffs are quite spectacular, and there is plenty of opportunity to take in the view along the way. Kim's Lookout is a similar height to Malabar, although it has better views over to North Bay and Mt Eliza, as well as the lagoon and reef.

The track heads south from here for a short way until a junction is reached. Take the left fork, which drops steeply down to Old Settlement Beach, unless you are heading to North Bay. Crossing another stile at the bottom, you can either walk through the paddock, or along the beach, finishing up at Lagoon Rd.

If you have left your bike up near the cemetery you will have about 2km to walk to retrieve it.

The Clear Place and Valley of Shadows

The most difficult walk on Lord Howe Island, but the views from the top on a clear day are spectacular