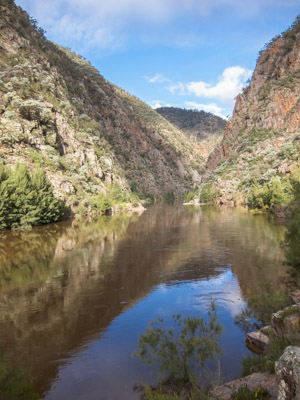 Together with the adjoining Bungonia NP, Bungonia SCA is part of one of the oldest public recreation reserves in the world, with the limestone caves (which were carved out of the SCA in 2010, and which are now part of the national park) first being protected back in 1872. It lies 35km east of Goulburn on the edge of the Southern Highlands. It consist of two parts, the western section which covers is the abseiling sections of Bungonia Creek and Jerrara Creek, and the southern section, which is bounded to the north by Bungonia NP, and to the east by the Shoalhaven River. It is used for a variety of activities, including paddling, bushwalking and canyoning.

The main road access to Bungonia State Conservation Area is fairly well signposted from both Goulburn and Marulan, as for most of the route it is the same as to the national park. From Sydney, head south west on the Hume Highway and take the exit just south of Marulan, passing straight through the roundabout. At the next T-intersection after 16km turn left to the town of Bungonia, and then left just past the middle of town.

To access the southern section, from Bungonia, head out of town on the Lookdown Road for 6.2km, and turn right on to a fire trail which leaves the road between two sections of private property. After 400m you reach a small national park sign and a parking area. From here the road gets rougher and 2wd cars may have some difficulty. You could park here and walk the 2km in. Otherwise, continue through an open gate, along and up a rough and eroded section of fire trail, and through another gate into the national park at MGA263410. It is another 1km of easier going to the parking area at the junction of the Stan Jones Fire Trail and the Trestle Track, at MGA271413.

The western section is accessed on foot via the Yellow Track from Bungonia NP.

The canyoning at Bungonia is similar to some of the longer canyons in the Kanangra-Boyd area, featuring relatively open canyons with rock that gets slippery when wet and can be quite loose. Scrambling and route-finding skills are necessary and they are recommended for more experienced parties. The most popular canyons are Jerrara Creek and Bungonia Creek, which also flow into Bungonia NP. Spring Creek used to be a popular trip, but it is closed because of loose rock. Long Gully is open, although NPWS advises against trips there for the same reason.

The Shoalhaven River can be kayaked, and runs alongside the park. However, the major difficulty is the 400m descent to the river, so generally trips are started and finished from outside Bungonia.

The Shoalhaven River is the only watercourse suitable for liloing. However, the river around Bungonia moves too slowly unless there has been recent rain, so it is not generally recommended as a lilo trip.

The main camping area is now part of the national park. Bush camping is allowed down at the Shoalhaven River, and at other places away from the main visitor areas.

Fitzroy Falls and Beyond, The Budawang Committee

An excellent guide to northern Morton NP including Bungonia SCA/NP