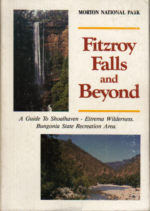 For anyone with more than a passing interest in Morton National Park, Fitzroy Falls and Beyond is an outstanding resource. It is both detailed and wide ranging, covering both the natural history and the influence of man, as well as information on recreation in the northern part of the park and Bungonia State Conservation Area.

The book is now out of print, but is well worth searching for in second hand book stores.

The book is divided into four main sections.

The first section covers the history of the park, from the Aborigines through to the fight to reserve the area as national park. Like many national parks, it was through the battles of a few key people that Morton National Park came to be. This section is also interesting for the history of the place names, and how much of this difficult to access area was explored in the 1800s by such resource hunters as miners and foresters.

The second section is probably most of interest to bushwalkers, as it covers recreation in the area. There are chapters on car touring, cycling, bushwalking, canoeing, and a separate chapter for Bungonia State Recreation Area (now State Conservation Area) including a short history, walks and caves. The bushwalking chapter lists numerous short walks in the Bundanoon area, as well as about 14 longer walks in the areas of Fitzroy Falls, the Shoalhaven and the Ettrema wilderness. Most of the walks are not found in other publications, and the longer ones have quite detailed information. All of them are accompanied by good quality sketch maps.

The third and fourth sections cover park management, including fire management, and natural history, including geology, flora and fauna. I found the natural history section the weakest, as in general the chapters contain too much information for someone with only a passing interest, but not enough detail to look up something specific. Flora is reasonably well covered, but geology and wildlife were covered better in Pigeon House and Beyond and I would have hoped that Fitzroy Falls and Beyond would be a step forward rather than a step back.

Overall, the book provides a wealth of information, and it is an excellent resource for any bushwalker interested in the area.