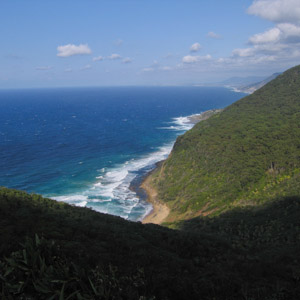 Lying just 30km south of Sydney, the Royal National Park is the oldest national park in Australia and the second oldest in the world. While the park has been quite well developed, there are still large areas of relatively unspoiled bushland. Rainforest and heath, waterfalls and creeks are all part of the attraction. There are a number of beaches along the coast, and Garie and Wattamolla Beach are both popular swimming spots, particularly in summer. Bushwalking is well supported with a network of criss-crossing tracks around the park.

There are a variety of ways to get to the Royal National Park. By car, there are park entrances at Loftus (the main one), Waterfall and Otford. The Loftus entrance is reached by taking the Princes Highway south toward Wollongong, and taking the signposted turnoff. By train, Loftus, Engadine, Heathcote, Waterfall and Otford stations all lie on the western edge of the park. Alternatively, catch the train or drive to Cronulla and then take the ferry from Cronulla to Bundeena, on the park's northern edge.

There are a number of spots for flat water kayaking in the park. These include on the Hacking River, Kangaroo Creek, South West Arm and Cabbage Tree Basin near Bonnie Vale.

Panoramic coastal views and great beach walking on this popular walk in the Royal National Park. Can be done in a day.

An in-depth site focussing on bushwalking in Heathcote National Park

The NPWS has an in depth site on the Royal National Park including walks and other activities, facilities, access etc.

A useful list of walks in the park with brief track notes, grouped by difficulty.

A reasonable summary of things to do in the Royal National Park.