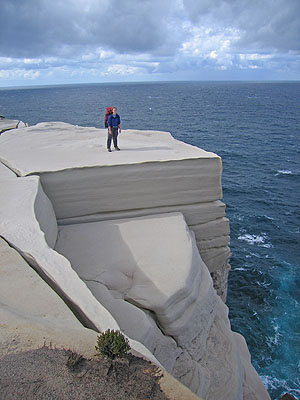 The Coast Track, also known as the Coastal Track, or Coastal Walk, is one of the classic Sydney bushwalks. It is also one of the most convenient, with the Royal National Park less than an hour from the city. The walk can be done in either direction. There are advantages to both.

Starting from Otford exploits the height differential and the greater frequency of public transport at the Bundeena end.

Starting from Bundeena gets the longer day out of the way first, has you walking with the sun generally at your back, and allows an afternoon stop for apple pie at the Otford Pie Shop.

The notes on this site describe the trip from Otford to Bundeena.

Camping permits are required for this walk. These need to be booked in advance for a small fee through the NPWS. Camping used to be available at several different places along the way, including Curracurrang and Providential Head, near Wattamolla. However, these options are no longer available. The only camp site on the route is now at North Era, roughly 18km from Bundeena and 8km from Otford.

Whichever direction you are going, make sure you check the transport timetable and costs from the other end before you set out.

From Otford Station, ascend the stairs that climb steeply up the slope to the south east to reach the fire trail. Turn left on the trail, and then right on to Fanshawe Rd after a short distance. It is about 300m to Lady Wakehurst Drive. Cross the road and head left to the lookout at Otford Gap. 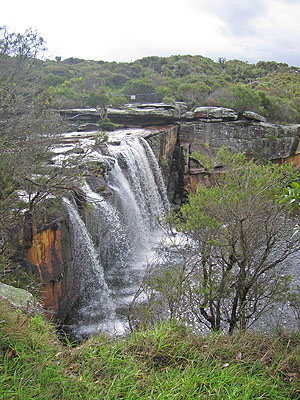 The signposted track leads out to an excellent lookout on the cliffs above Werrong Point. Continuing past the lookout, the track descends into the littoral rainforest of Palm Jungle. After about 1km you emerge from the jungle into grasslands, and a further 1km brings you to Burning Palms Beach.

The track heads around the back of Burning Palms Beach, up through the houses at the north end, and climbs up on to Burgh Ridge. Descend towards the surf club at the back of the beach, cross the bridge, and locate the track at the north end of South Era Beach that climbs up to Mid Era Ridge. Descending to North Era Beach, the campground is nestled back from the beach in amongst groves of trees.

The next morning get an early start. If the tides are low, you can rock hop around Thelma Point to Little Garie Beach. Otherwise there is a track that keeps close to the top of the cliffline. From Little Garie Beach, head under the cliffs to Garie Beach. Walk along Garie Beach and locate the track at the north end that climbs up on to the cliffs. Passing a fire trail on the left after about 1km, the track continues for another kilometre before starting to descend. It crosses a minor creek before reaching the major creek of Curra Brook, at Curracurrong. Just after climbing out of the brook, the track joins with another fire trail from the left and becomes much wider. 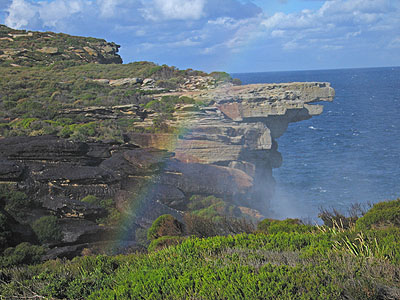 Another creek flows over the cliffs just ahead. On windy days, the water from this creek is blown up over the cliffs and back into the creek! The track cuts away from the cliffs to cross it. Before following this track, look for the distinctive head of Eagle Rock on the cliffs to the north.

Another 1.5km along the cliffs brings you to Curracurrang Gully, where the small creek flows into an inlet. Cross the creek and continue further along the cliffs. The track then cuts away from the cliffs and reaches the back of the main car park at Wattamolla. Wattamolla is a sheltered inlet where the junction of two creeks has formed a lagoon behind the beach. Swimming is possible at both the lagoon and the beach. Cross the main car park, the smaller car park, and cross the smaller of the creeks on rocky slabs to pick up the track on the other side. This follows alongside Wattamolla Creek for about 500m before crossing at another set of rocky slabs. 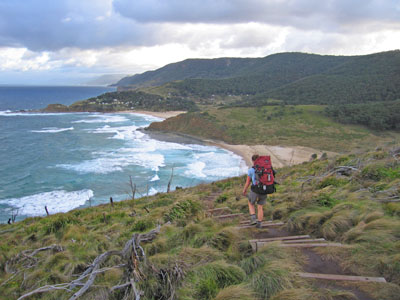 Climbing up the ridge, after another 600m it reaches a Y-intersection. Take the right hand branch (the track, not the fire trail), which heads again out towards the cliff tops. Follow the cliffs around to Little Marley Beach. Climb up on the cliffs at the north end of the beach and follow the cliff top track to (Big) Marley Beach. At the north end of Big Marley the lagoon may need to be crossed, depending on rain and tides. Once across pick up the track that again climbs up to the cliffs and follow it for about 2.5km to a short steep descent to the Waterrun, where a small creek tumbles over the cliffs into the ocean.

At the top of the climb up the other side, keep right at another Y-intersection. The track gradually heads away from the cliffs, joining another track just before crossing a small creek. Ignore a turn off to the left on the other side of the creek, and follow the track back out to the cliff edge for more impressive views. About 500m brings you to an intersection where a minor track goes straight ahead, while a more significant one turns off left. Take the track to the left, which leads back to a service road at a T-junction. Turn left, and follow the service road back to the end of Beachcomber Ave, where there is an information board.

Follow Beachcomber Avenue until it reaches a T-junction. Turn left on Scarborough St and then right on Brighton St, which takes you down to the ferry.

A report on a shortened version of the Coastal Walk, from March 2001

Track notes for the Coast Track

Brief notes on the Coast Track