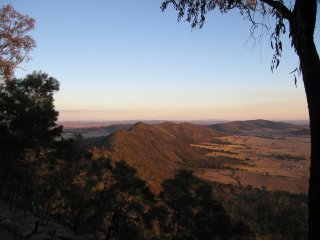 The Rock is the highest point of the range, which stretches off to the south

The Rock is large outcrop shaped like a crouching lion that rises over the plains south-west of Wagga Wagga, in southern NSW. It is an obvious landmark, and a worthwhile climb for the views from the top of the surrounding country.

From Wagga Wagga, head south west on the Olympic Highway, and turn off to right to the town of The Rock after about 30km. Drive through the town, and turn left about 5km past the town to the parking area for the nature reserve. The start of the Yerong Nature Trail is clearly signposted.

The route to the summit follows the Yerong Nature Trail. The track is reasonably easy to follow. A fire trail heads from the car park winding through open woodland forest towards the south end of The Rock. Along the way there are interpretive signs about the cultural history of the area. 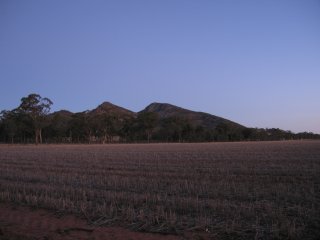 The Rock, viewed from the west, near dusk

After a couple of kilometres the track heads up towards The Rock from the east, and climbs up the talus slope on a series of switchbacks. At the base of the cliffs the track turns left, and follows the cliff line around to the south and then west. There are good views to the south here, of the plains and lower hills in the range. You shortly reach a bit of a saddle.

From here the track traverses generally west under some small cliffs, before heading steeply up the main east facing ridge to the summit, and you reach the top surprisingly quickly. From the summit of The Rock there are 360° views of the surrounding plains, and on a clear day it is possible to see all the way to the Snowy Mountains. After a break, return the way you came.

A good coverage, mostly of day walks, across the state