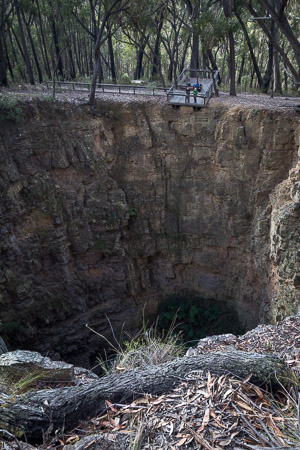 Deua National Park lies on the coastal ranges inland from the south coast towns of Batemans Bay and Moruya, about 70km south east of Canberra. It is a large park, covering over 120,000 ha, with about a third of this declared as wilderness. There is a range of geology from the sedimentary sandstone and conglomerate, through to the volcanic rhyolite and granite, though of particular interest are a number of limestone cave systems. There is little development, and much of the park retains a wilderness feel.

Krawarree Rd, which becomes Badja Rd, runs alongside the western edge of the park, and Berlang Camping Area in the northern section of the park can be accessed off this. Big Badja Hill can also be accessed from a fire trail off Badja Rd near Pikes Saddle.

On the northern side of the park, Araluen Rd provides access to the camping areas of Bakers Flat, Deua River and Dry Creek. On the eastern side, a 4WD is needed to access the Bendethera Valley.

There are few marked tracks in the park. The two main ones are the impressive walk to the Big Hole and Marble Arch, and the walk along Con Creek to Bendethera Caves.

At the other end of the scale are the three peaks of Mother Woila, Scout Hat and Tabletop, in the middle of the Deua Wilderness, which are a tough challenge even for experienced parties.

While there are not canyons in the same vein as the Blue Mountains, Reedy Creek cuts an impressive limestone canyon at the end of the walk to Marble Arch, and is well worth the visit.

There is a network of fire trails, particularly on the eastern side of the park. Most of these are shared with vehicles.

Liloing is possible and pleasant in summer on the upper reaches of the Shoalhaven River, and also in the Deua River.

There are numerous limestone cave systems in the park. The most well known are Bendethera Caves, Wyanbene Caves, and the area around Marble Arch. Some of these need permits to access, as do all of the less well known caves in the park.

The Berlang Camping Area is situated on the banks of the upper Shoalhaven River, in the north-western part of the park, and is pleasant in the warmer months. The camping areas of Bakers Flat, Deua River and Dry Creek all lie on the Deua River, on the north-eastern side of the park. In the middle, accessible only via a network of fire trails, is the Bendethera Valley camping area.

The Big Hole and Marble Arch