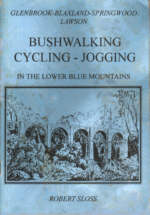 Bushwalking - Cycling - Jogging in the Lower Blue Mountains gives a reasonably comprehensive overview of trails in the area of the lower Blue Mountains south of the Great Western Highway. In general the trails are short and more aimed at someone with an hour to spare rather than a day. However, more experienced walkers can link some of the tracks together to form longer walks.

The book is self published. While the maps and typesetting are fine, a few minor changes might have made the book a lot easier to use.

The introduction is very brief and is mostly to explain terminology used in the book.

The track notes are brief, but sufficient, being mostly dictated by the short length of most of the walks. At the end of the notes, the sections of track within the walk are described by length and difficulty. While this would seem to be a good idea, it makes it hard to build up an overall picture of the grade of a walk. It is probably more useful for occasional bushwalkers rather than regular walkers.

Twelve sketch maps are included in the book, as well as an overall area map to show the location of the sketch maps. The sketch maps are reasonably good, being detailed and in three colours. The walks are highlighted in green, however, they are not labelled making it difficult to work out which description relates to a given walk on a map. The handwritten names on the map would be easier to read if printed. It might also have been better to leave off names where not relevant to the walk(s) as the maps are relatively cluttered.

Overall, a useful book, aimed at the less frequent walker. With a few minor changes it could have been significantly more user friendly.