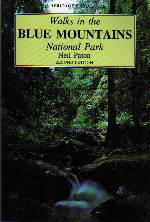 Neil Paton's Walks in the Blue Mountains National Park is an interesting book for the walker. Rather than describing walks, it describes around 60 areas in the Blue Mountains, divided into seven main regions. This makes it a useful resource for the slightly more experienced bushwalker, who might be more likely to plan their own route than follow track notes straight out of a guide.

The book starts with a brief potted history of the Blue Mountains, before moving into the descriptions of the various areas.

The descriptions of the areas range from a few sentences to around eight pages, so the amount of detail in them varies considerably. The descriptions tend to be conversational, liberally spiced with the author's opinions. Sometimes these are useful, although others you would not expect from a guidebook author.

For example, in the section on Mt Wilson to Deep Pass, he comments on the cliffs around the Wollangambe River, "and this is where the Wallangambe (sic) topo is one of the most misleading maps I have ever seen". Of course, it is well known to walkers in this area that the 20m contour intervals on the map hide some significant cliffs, and a simple mention of this fact would be sufficient.

The descriptions also include a number of maps. The maps are roughly sketched in black and white, and are sometimes useful, although there is no reference point between the maps and the areas. This makes them less than useful for people unfamiliar with the area. Also, it is worth being wary of some of the tracks on the maps. As with normal topo maps, some of them are either out of date or just plain wrong. The Wallangambe (sic) Trail and Mt Solitary maps in the book are both examples of this.

I was not enamoured of some of Paton's attitudes to the bush, particularly in respect of the more challenging areas. For example, "The track up Mt Solitary is rocky and a little vague in places, and there is some scope for a few arrows". There is no need for bushwalkers to be defacing the bush, and painting arrows on rocks should not be encouraged by any guidebook. There are other similar examples in the book on marking and clearing trails.

Despite the criticisms, there is a wealth of information in the book. As noted before, it is useful for more experienced bushwalkers looking to plan walks in particular areas. Much of the information is not available in other books, and where it is available, it is generally much harder to find.

Overall, this is a book worth buying. However, the reader should beware that there are errors, and not to rely solely on the book for information. I would not recommend it to the inexperienced walker for this reason.