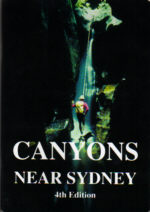 Certainly improvements have been made since the third edition. The five lines on "Walk Lightly" have been replaced with a page on Blue Mountains Canyon Code from the NPWS. Some of the history information has been corrected, although most of the canyon names have not. Quite a number of errors, including well known ones, remain.

One of the problems in writing any kind of guidebook is that conditions change. Due to the large amounts of water flowing through, canyons can be particularly susceptible to this. Belays get washed away, water levels rise or fall and tracks can appear and disappear. A note in the book pointing this out to less experienced canyoners would be a good idea.

The main additions to the book are an increased number of descriptions of canyons around the Bungleboori area of the Wollangambe Wilderness, along with a map of the area. This seems to be counter to the NPWS Canyon Code guidelines (printed on page 5 of the book) which state

The obvious attraction of this book is that apart from a 1993 Wild Guide by David Noble, there is a limited amount of written information on canyons. Canyons Near Sydney fills a niche and without no alternatives, the quality of the information is of secondary importance to the fact that there is some information. Many canyoners refer to it as their "Bible".

If there were future editions, it would be nice to see the errors corrected, and no new information on canyons in wilderness areas provided.