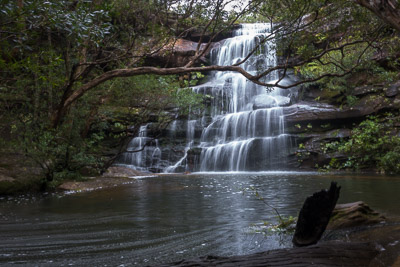 At 251m, Mt Wondabyne is the (joint) highest point in Brisbane Water NP. Surprisingly, it also has 360° views, which is unusual for peaks in the sandstone country around Sydney.

The walk to Mt Wondabyne passes near Kariong Brook, with its impressive 10m waterfall, which is well worth the detour.

The walk is best in late winter, as the wildflowers will be out along the tracks. After rain is good for the waterfall to be in flow, though the downside is that the track becomes wet and muddy. The walk is not great on a hot day as it doesn't get much protection from the sun, though you could save the waterfall detour for the way back, and have a dip in the pool. 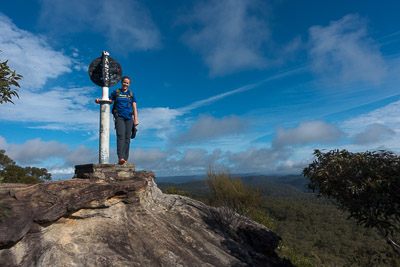 The start of the walk is at Staples Lookout, off Woy Woy Rd, Kariong.

If coming from Sydney, take the Gosford exit off the M1, and turn right after 1.4km on to Woy Woy Rd. The lookout is 5km along the road, on your left.

Walk north up the road for 70m, cross over the road, and climb over a gate on to the fire trail. Follow the fire trail through an old quarry, ignoring a couple of other fire trails off to the right.

After a further 250m, turn right at a four-way intersection on to another fire trail, Tommos Loop Trail (signposted Thommos Trail). Down the bottom of the hill, around 400m, there are some aboriginal rock engravings, protected by rock bollards. 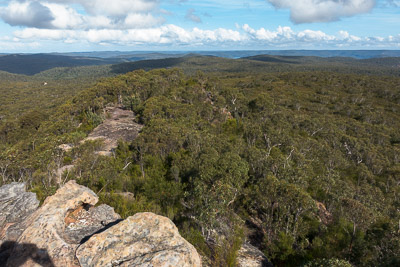 The ridge leading to the summit

Continue along the fire trail for another 1.2km (15 minutes) to a turnoff on the right, signposted to Girrakool. This becomes a foot track, which descends steeply to Kariong Brook Falls, about 15 minutes away. The falls are quite spectacular, dropping around 10m into a large pool, which would be a nice swim on a warm day.

After a break, return back to the main fire trail and turn right. The fire trail is quite scenic, crossing a number of large rocky platforms, with occasional views of Mt Wondabyne.

A further 1.5km (20 minutes) on, veer off the fire trail to the right on to a signposted foot track that contours around the top of a few gullies. This can get quite muddy after rain. 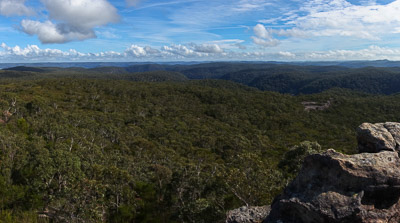 After 1km (20 minutes) you reach a junction with another fire trail. Turn right, and after 200m, turn left on to a wide foot track signposted to Mt Wondabyne. This climbs, gently at first, and then more steeply, before flattening out around the back of the mountain. On the south west side of the mountain, at GR396924, look for an unmarked track off to your left. This climbs up to the trig, via a scramble through a couple of small clifflines, and a narrow rocky ridge.

The views from the trig are spectacular, as are the views from various rocky ledges facing in several different directions. This is a good spot for a long break. 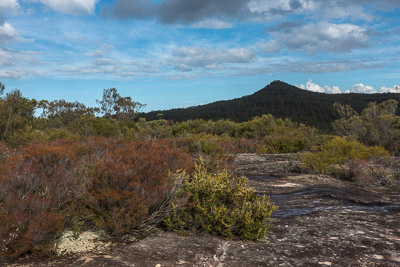 After a break, return to the main track, and turn left. After 100m this reaches a clearing, where you turn left on to a fire trail. A further 700m (10 minutes) on, you reach a T-intersection with another fire trail, where you again turn left. This winds down and in and out of a number of gullies, before reaching a 4-way intersection with views back to Mt Wondabyne after 1km (15 minutes). Cross over this, and then after 400m (5 minutes) turn left on to another fire trail.

This climbs up through pleasant open forest, and over a minor ridge, before dropping down to rejoin the foot track you turned off on to earlier. Continue along this fire trail all the way back to the Woy Woy Rd. Turn left and walk 300m up the hill back to Staples Lookout.

A relatively easy walk to a spectacular sandstone overhang.