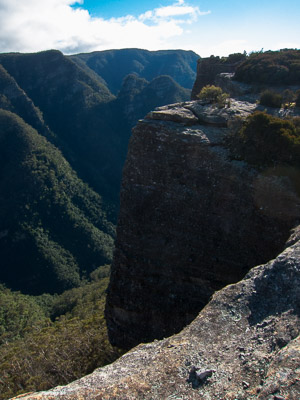 Views from the walk out along the plateau

The Orange Bluff campsite is an impressively large, grassy flat on the beautiful and wild Kowmung River at the foot of Brumby Ridge. Its name comes from the massive orange cliff that towers over the campsite from across the river. The route to Orange Bluff is perhaps the shortest route to the Kowmung River from Kanangra Walls, and one of the easiest - if any route can be said to be easy, given the 740m descent to the river, and the same back up to the tops. There are great view from the walk out along the tops, and also from Cottage Rock on the Gingra Range.

The route is on track, though once you leave the Gingra Range, the track is not always easy to pick up, and parties should be competent at navigation. The navigation is fairly straightforward.

Summer is a good place to be down paddling in the river, though the long climb out can be tough in the heat. Autumn and spring are both good times to visit, while winter is good for the climb, but can be chilly.

From the car park at Kanangra Walls, head out towards the lookouts, and turn right, following signs to the Plateau Track. In the saddle, avoid a turn off to the right to Dance Floor Cave and ascend a set of steps on to the plateau proper. 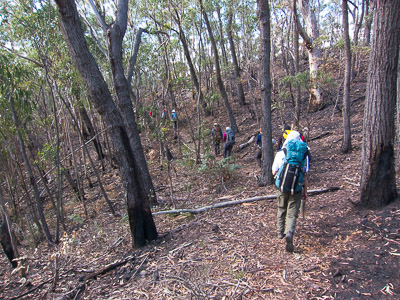 At a large rocky clearing about 1km on to the tops, the trail divides. Neither branch is obvious as the clearing is large. The clearing is just after a short climb from a saddle, and has excellent views from the edge to the north. One branch of the track heads initially east, and then south towards Maxwell Top, and the other leaves from the northern side of the clearing, heading north east along the main part of the plateau. Take the east branch, which climbs up to the top of the ridge and then heads south. Avoid a turn off to the left after another kilometre, and continue along the eroded track which drops into a saddle and then climbs to Murrarang Top. Down the other side, keep left at a fork, and shortly descend through a break in the cliff line, with a small scramble.

Turn left and continue along to shortly reach the Coal Seam Cave. This is a large overhang which is often used by parties on the Friday night of a weekend walk. At the end of the cave, the track drops steeply down to a saddle, where it forks. There is an optional detour via the right fork up to Cottage Rock, but otherwise take the left fork, which contours below Cottage Rock.

A further 500m on, just after a saddle, keep left again - the right fork (faint) leads out towards Bullhead Mountain. Descend into a saddle for about 1km and then climb steeply up to First Top Mountain.

The main track keeps to the north side of First Top Mountain. Near the top, pick up the track off to the right (SE) that leads over First Top Mountain, and down Brumby Ridge. Keep an eye on the map as you descend. The track largely follows the main ridge, ending up at the bottom opposite Orange Bluff. This ridge heads south for about 1.5km, then SE for around 1.5km, and finally east down to the river. There are a few opportunities to wander off on to minor ridges so some navigation may be required, as the track in places is indistinct. In particular, the track may disappear altogether for the last few hundred metres to the river, as the ridge flattens out and the ridgeline becomes hard to pick.

Once at the bottom, campsites can be found for about 400m along the river, so there are plenty of options.

The following day, return the way you came. 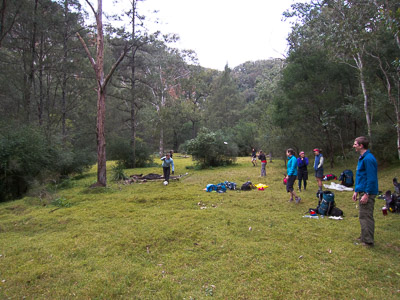 A harder walk in the upper reaches of the beautiful lower Kowmung River.