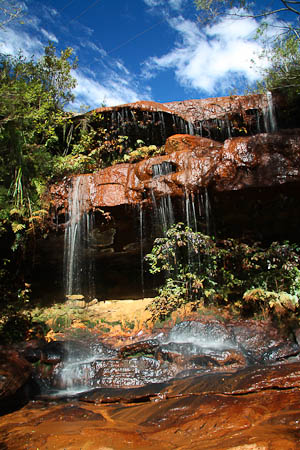 The Empire Pass Track was constructed in the early 1900s, and improved and opened on Empire Day, 1913, hence the name. It passes through a beautiful gully of temperate rainforest and visits several delightful waterfalls in the North Lawson area.

The walk can be done all year round but is good in the warmer months as much of the track is in the shade of the rainforest gullies. It is best after rain, as the waterfalls will be flowing better, though the tracks can become somewhat muddy in places.

Catch the train to Lawson, and exit on the north side of the station. Turn right into Loftus St, then take the second left into Hughes Ave and follow it to the end.

If coming by car, heading west along the Great Western Highway, turn right into Badgery Cr, just before the road goes over the railway line at Lawson. Drive along Badgery Cr for 0.9km and turn right into Hughes Ave. Drive to the end of Hughes Ave, past Fairview St, and park.

Walk to the north, down under the power lines to the start of the Empire Pass Track, marked with a sign board. Follow the track through open forest for 400m (about 5 minutes) to where it passes under more power lines. Keep left at a Y-intersection, ignoring a track to the right which heads down the hill under the power lines. Continue for another 400m up a rise to a fire trail with a locked gate on your right. Cross over the fire trail onto another foot track, signposted to Echo Point, and follow this for 400m to a track junction. 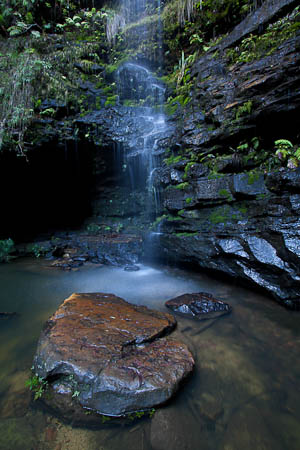 Take the track straight ahead. At the first rocky outcrops, the track continues down through a slot to the left for 100m further to Echo Point lookout. There are good views of the valley below through which the Empire Pass track passes.

Returning to the intersection, take the other track signposted to Empire Pass, Lawson Park and Dantes Glen. This contours for 600m to a set of rocky outcrops, with a set of stone steps leading down through a cleft. This is a quick way down into the valley, but misses out on the waterfalls, so continue along the main track.

Another 400m along the track enters a gully and you reach the first falls. Fairy Falls can be seen dropping in several stages from a lookout on the track. A little further along the track crosses the creek just below the top falls. Just beyond here is another track junction. Left leads up to North Lawson Park, so take the right branch. After a short distance it starts to descend a set of well constructed steps, at first gently, then more steeply until the creek is reached. Crossing a bridge at the bottom, Dantes Glen Falls can be seen on the left. 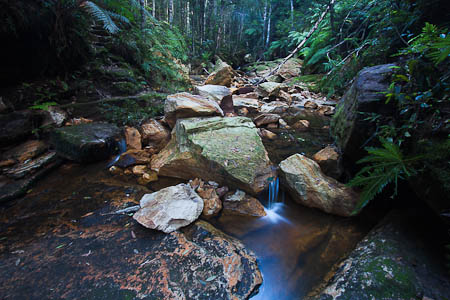 Head downstream on the left bank for 50m before the track crosses over to the right at a sign saying No Through Access. It is about 50m upstream on the other side creek to St Michaels Falls.

Continuing downstream on the right bank, the track stays at the same level, while the creek drops away below. Just past a small side creek, a set of steps leads up to the short cut. This could be used as a quick way back out.

A little further on the track heads down steps to creek level, and crosses directly over to the left bank. The rainforest in this section and the preceding one is quite stunning. After a little way, the track climbs up and follows the cliff on the left for a few hundred metres. It then drops back down to creek level, before crossing over and climbing up on the right side. It stays high from here as it rounds Echo Bluff. From here it stays on the right hand side of the creek all the way to Frederica Falls.

Climb up to the fire trail at Frederica Falls and cross straight over on to another foot track, signposted to Hughes Ave. This slightly scrubby track generally follows the creek before heading uphill and emerging under the power lines back at the start of the walk.