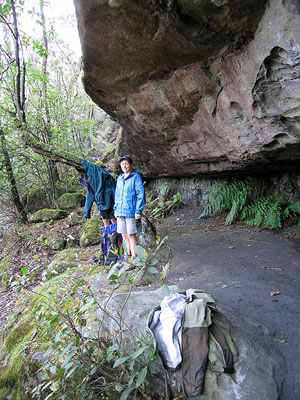 The route is on track, though at some places on the Gingra Range it can be indistinct, and parties should be competent at navigation. The navigation is fairly straightforward.

This is a fairly long ridge walk, so is best in the cooler months.

From the car park at Kanangra Walls, follow signs to the Plateau Track. Avoid a turn off to the right to Dance Floor Cave and ascend a set of steps on to the plateau proper.

At a large rocky clearing about 1km on to the tops, the trail divides. Neither branch is obvious as the clearing is large. The clearing is just after a short climb from a saddle, and has excellent views from the edge to the north. One branch of the track heads initially east, and then south towards Maxwell Top, and the other leaves from the northern side of the clearing, heading north east along the main part of the plateau. Take the east branch, which climbs up to the top of the ridge and then heads south. Avoid a turn off to the left after another kilometre, and continue along the eroded track which drops into a saddle and then climbs to Murrarang Top. Down the other side, keep left at a fork, and shortly descend through a break in the cliffline. 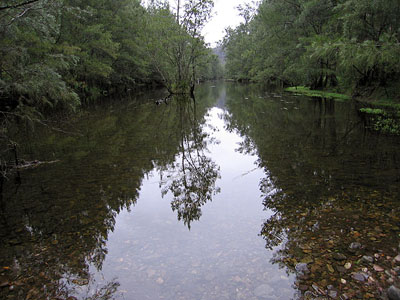 Continue along to shortly reach the Coal Seam Cave. This is a large overhang which is often used by parties on the Friday night of a weekend walk. At the end of the cave, the track drops steeply down to a saddle, where it forks. The right fork leads up to Cottage Rock, so take the left fork, which contours below Cottage Rock. A further 400m on, keep left on the main track, where a fainter right fork leads up a small knoll, and out towards Bullhead Mountain. Descend into a saddle for about 1km and then climb steeply up to First Top Mountain.

The hill after First Top Mountain is unnamed. As the track goes up the hill, there is a branch veering off to the right. Take this branch, as the other one peters out over the top of the knoll. Just past here another track heads off to the right from a small clearing. This leads down Roots Ridge.

After that, the route to the Kowmung is fairly straightforward. The track is relatively clear, and other than the track dropping on to the lesser ridge around GDA428378 (AGD427376), there are no navigational difficulties.

Once at the junction, look for a spot to camp. There are small campsites on both banks of the river, suitable for a couple of tents, though these areas can be boggy after rain. However, if you have time, there are better campsites down near the old gauging station, about 600m downstream, on either side of the river.

Water can be obtained from Gingra Creek, though it can run underground in dry periods. Many people will also drink water from the Kowmung, though there are farms a long way up in the catchment. Treat the water if you have any concerns.

The following day, retrace your steps from the previous day back to Kanangra Walls. 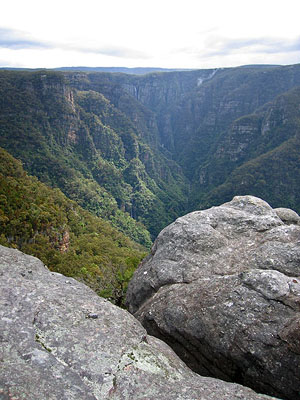 Kanangra Falls and Kanangra Deep from on the Plateau

The shortest walk from Kanangra Walls to the scenic Kowmung River, with an excellent campsite below the towering Orange Bluff