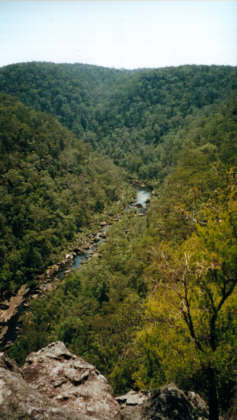 Erskine Creek lies in the Blue Labyrinth, the area west of the Kings Tableland and south of the Great Western Highway. This was a popular bushwalking area before the flooding of the Burragorang Valley with the Warragamba Catchment, as it was easily accessible by rail from Sydney. It lost favour as bushwalkers moved further afield to the Wild Dogs, Kanangra and the northern Blue Mountains, but has experienced a bit of a revival in recent times.

Erskine Creek has some excellent swimming holes, and is a great spot for an easy overnight walk. It is best in summer to allow plenty of opportunities for swimming.

Drive to the Glenbrook entrance to Blue Mountains National Park. From the entry gate, follow the sealed road for 2.6km to where it becomes unsealed, and a further 5.4km to a junction with the Nepean Lookout Trail. Turn left on to the Nepean Lookout Trail and follow it for 2km to the start of the Pisgah Lookout track, where there is a small parking area on the left. Park your car here. 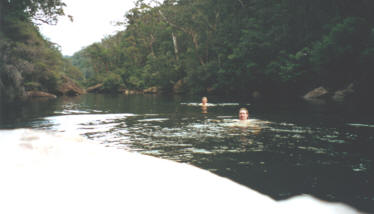 If you drive, a park entry fee applies per car.

Walking from Glenbrook station would be fairly impractical due to the distance, however, mountains bikes could be used if you were doing it as a day walk. Overnight packs might cause some trouble.

Continue walking along the fire trail for a further 1.8km to the start of the Jack Evans Track, on your right. Follow it to the bottom at Erskine Creek. Turn right (upstream).

While this walk is largely off track between the bottom of the Jack Evans Track, and the Tierney Track from Pisgah Rock, there are faint pads along the banks for much of the walk if you can find them. Close to the main tracks these pads are quite well formed.

It is fairly easy going on the east bank for up to 700m. You can cross at either the second (at around 400m) or third (around 700m) set of rapids. With care you may be able to keep your feet dry. A rough track on the other side should take you as far as the junction with Lincoln Creek. For the last few hundred metres before Lincoln Creek, it is worth following the creek itself as there are lovely cascades down rocky slabs. 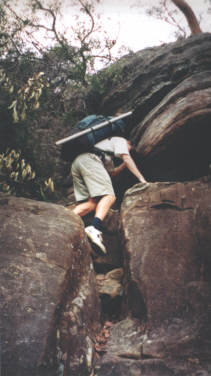 Scrambling up one of the climbs to Pisgah Rock

There is a superb swimming hole at the junction, with cascades flowing in from the two side creeks. There are good campsites at the Lincoln Creek junction, both near the river, and slightly further up the ridge between the two creeks.

Alternatively head further up Erskine Creek. A rough track starts on the west side, but crosses after about 250m to the rock shelf on the east side. From here, it is a bit over 1km to Dadder Cave, on the same side, which is a large overhang that has been used for camping. There is a visitor's book under a rock shelf. There are a couple of other overhangs before Dadder Cave that could be used if desperate. A further 300m on the same side of the creek along a rough track you reach Blands Pool, a beautiful waterhole, and the biggest swimming hole in this section of Erskine Creek. 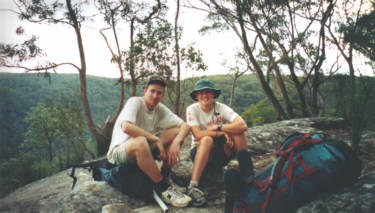 On top of Pisgah Rock, with the Blue Labyrinth in the background

Returning to the junction, there are a couple of tracks that lead to the route up to Pisgah Rock (Tierney Track). One heads up the Monkey Ropes Creek for some way before climbing up to the cliffs; the other starts near where Lincoln Creek flows into the pool, and heads up to the cliffline and follows it along a narrow ledge. The two tracks rejoin at start of the first scramble.

To get on top of the cliff line there are about five short scrambling sections - you need to watch for these as the route is not obvious, though someone has scratched arrows into the rock in places. They are mostly easy climbs without a pack, but you may wish to take a small rope if you are carrying a full pack. There is some exposure in a couple of places on the climb. At the top you come directly out on Pisgah Rock, from where there are excellent views. It is a 10 minute walk back to the car.

If you like exploring, from Pisgah Rock, a short bush bash of about 300m to the north brings you to Attic Cave, a useful camp cave.

An excellent walk in the lower Blue Mountains following both ridges and creeks.