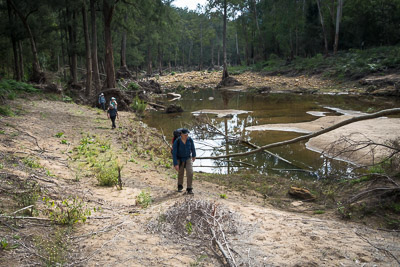 Walking up the Nattai River

Russells Needle is a rocky sandstone spine, separated by a deep saddle from the main cliff line, which sticks out dramatically into the Nattai Valley. The summit ridge offers tremendous views. Attaining the summit, or at least the summit plateau, is achievable for experienced bushwalkers with a head for heights. Some route finding and easy rock scrambling is required. There is no formal track once you reach the Nattai River.

Russells Needle can be reached as a long day trip from Wattle Ridge Road, via Slott Way, or as a more relaxed overnight trip. If doing it as an overnight trip, an alternative option would be to return via Starlights Track.

The walk starts from the car park at the end of Wattle Ridge Road, in Hill Top. 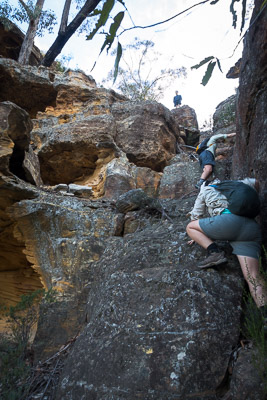 Scramble up on to the summit ridge of Russells Needle

Coming from Sydney, take the Hume Highway (M31) south, and take Exit 10 (Church Ave) signposted to Colo Vale, Hill Top and Yerrinbool. Turn right at the roundabout to cross the freeway, and then right again on to Wilson Dr after 1.6km, just before crossing the abandoned railway. After 5.2km turn left on to Chalker Parade, and then follow the road around to the right after it crosses the old railway line, and becomes West Parade. This takes you into the village of Hill Top, which includes the Hilltop Village Bakery and Cafe, opening early on the weekends.

Continue along West Parade. As the road veers north-west, it becomes Wattle Ridge Road. Not far out of the village the bitumen ends, and it becomes a generally good quality dirt road, 2wd accessible under normal conditions. Follow this to the car park at a locked gate, opposite the private property of Wattle Ridge. There is parking for around 8-10 cars, and an information board at the car park.

The car park can be busy on weekends so consider car pooling from Hill Top. 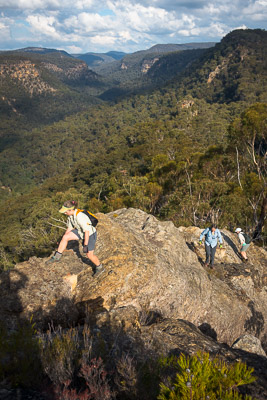 Pass through the locked gate to the west, and follow the fire trail around the perimeter of the Wattle Ridge property for 1.7km (25 min) to an intersection with a less distinct fire trail, and a signboard. Take the left branch on to the less distinct track, signposted to Starlights Trail. This heads over a small rise. After 400m (5 min), note a turnoff to the right at 618011 (Hilltop) marked with S.T. painted on the ground on a rock, and continue on the fire trail for another 130m keeping a close eye out for another fainter (unmarked) track heading off to the right. If the fire trail is heading SE, you have probably missed the turnoff and gone too far.

Turn on to this track, which heads up an almost over the top of Point Hill, from where there are glimpses of views down to the valley. It then descents gently for the next 800m (15 min) into a small gully, to a track junction at 609009. The right hand branch, climbing up on to the ridge, leads to Ahearn Lookout. Take the left hand branch, Slott Way, which leads down the south (left hand) side of the gully. 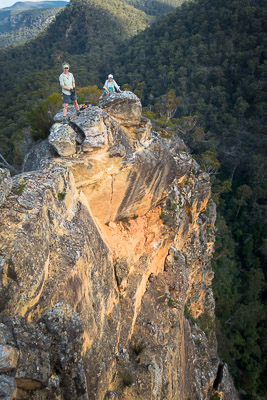 Near the summit of the Needle

The track is relatively well-marked with tape, and blue metal markers. The track quickly cuts across to the north the gully and then sidles above the creek on the right-hand side for the next 800m. A good lookout on a protruding (and airy) rock ledge is reached with views of the valley, though not of Russells Needle.

From here, the track heads steeply down to the left, starting with a slightly awkward climb down. The track follows the minor ridge briefly before cutting steeply right under a small cliff line. Keep a close eye on the markers. After a further steep descent, the track gradient eases off as the route follows a spur generally west. The Nattai River is reached at 593002

The banks of the Nattai can be scrubby at times, but at the time of writing the going is fairly good due to significant floods in early 2016. 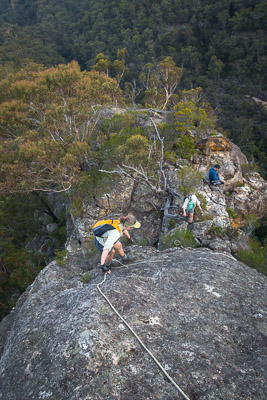 Using a handline to help descend the summit

Follow the Nattai south for 2km until you reach the foot of the ridge which rises to the south up to Russells Needle. Climb the ridge south up to the cliff line, through prickly vegetation. Sidle to the east along the cliff line on somewhat loose scree slopes for around 400m until you can see a spot to scramble up to the top of the ridge. One spot is around 599976 but there are probably others. The summit ridge is a narrow rocky causeway with impressive views both east and west.

Follow the summit ridge north for about 200m to the summit. There is some easy scrambling in various spots, nothing particularly exposed until you reach the final climb. At this point you can either scramble easily, but with some possible exposure, onto the summit plateau. Alternatively, drop down to the eastern side of the ridge and walk up an unexposed footpad to the summit plateau, which has superb, near 360 degree views.

The true summit is a large boulder perched on a block with an ominous looking crack in it, reached by a narrow vertiginous causeway. Approach at your own risk!

After taking in the views return the way you came. 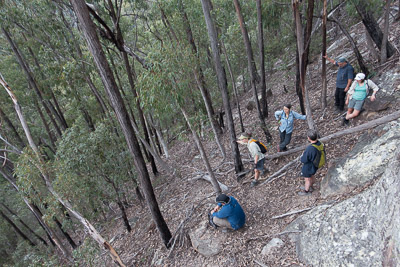 Steep descent back to the Nattai

Easy walk down to beautiful grassy campsites on the Nattai River

A relatively easy walk to a spectacular lookout

Easy fire trail walking to the Little River, through one of the most impressive stands of Blue Gums around Sydney

A short steep route to the middle Nattai River, with views on the way in