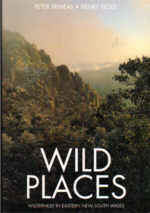 Wild Places is an authoritative history of wilderness and the wilderness movement in eastern New South Wales. First published in 1983, it has been out of print for some time. It has been updated in detail since the passing of the Wilderness Act in 1987, and is excellent reading for those who care about wilderness in NSW.

The first few chapters review the history of man's relationship with wilderness in NSW. Starting from the aboriginal peoples, it traces the arrival of white men, the exploration and expansion of the colony, the subsequent development of interest in conservation in the late 19th and early 20th centuries, finishing with the battles of the '60s and '70s and the eventual passing of the Wilderness Act.

Each of the major wilderness areas has a chapter going into detail on history, landform, geology and flora, although fauna is less well represented. The history in particular is well researched and written.

The text is accompanied by detailed maps of each area, and Henry Gold's black and white photographs. The photos are superb, and alone are worth the price of the book.

Wild Places is a purchase well worthwhile for anyone with an interest in conservation, and those wild places that we all treasure.