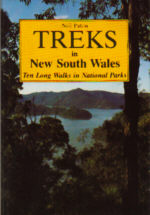 Neil Paton's Treks in New South Wales describes ten long walks in New South Wales national parks, and in the introduction Neil states that he is attempting to fill a gap in the market that mostly focuses on day walks. This is an admirable aim, however the result falls some way short of success.

The book is aimed at experienced walkers, and leaves out the usual rundown on the basics of camping. A brief introduction leads into the walks.

Each walk is given a separate chapter, and there is a map for each walk. The maps are low quality and not very useful, due to them being black and white and their small size. The walk descriptions themselves are quite detailed but lack readability as the paragraphs tend to be too long. A good editor here would work wonders.

The choice of walks is also an interesting one. Given that the book is aimed at experienced walkers, the amount of fire trail/road walking is too high. Woodford to Blaxland, Rylston (sic) to Putty and Newnes & Glen Davis all have more than half of the walk on fire trail or road.

Also, the walks in the Royal and Heathcote National Parks are now much harder to organise due to the necessity of arranging permits for camping. In the case of the walk in the Royal, it would have to be redesigned to cope with the current permitted camping areas. The book is a little out of date here, and should probably be updated for this.

Given that some very good long treks can be had in Morton/Budawang National Parks, and Kosciuszko, just to name a couple, it seems that some of the ones that have been included are just to keep them all within easy reach of Sydney.

In the book's defence, some of the treks are quite good, and the one through Marramarra National Park is a welcome surprise since there is very little other information on walking in Marramarra.

Overall, while the book has some good points, it has a lot of shortcomings. There is still plenty of space in the market for a good book on extended walks in NSW.